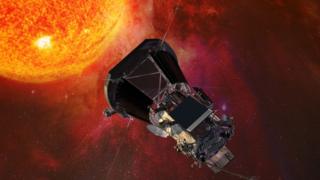 Nasa has launched its latest mission - a special spacecraft that will travel closer to the Sun than any spacecraft has done before.

The Parker Solar Probe lifted off in the early hours of Sunday 12 August from Cape Canaveral in Florida, USA.

It was a day after its original launch time because of technical and safety checks that still needed to be done.

The probe is set to become the fastest-moving manmade object in history.

What is the Parker Solar Probe?

The probe is a special spacecraft about the size of a small car. Its mission is to travel deep into the Sun's atmosphere to learn more about it.

It won't actually 'touch' the Sun, but it will be the first time that a spacecraft has travelled so close to it.

If everything goes to plan, the spacecraft will travel through the Sun's atmosphere, facing brutal heat and radiation conditions.

Scientists have spent 60 years working on the project, which is expected to cost more than £1 billion, so it's a pretty big deal.

What's the Parker Solar Probe going to do? 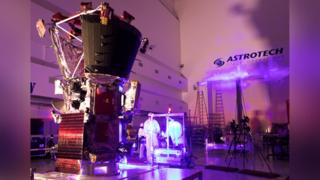 Reuters
In this photo, we can see scientists running tests on the probe to make sure that it's ready for its mission

The Parker Solar Probe will be finding out lots of information about the Sun and it has been designed to send this information back to Earth from around 89 million miles away.

The Sun is the only star we can study up close. So, by learning more about it, the idea is that we can find more about other stars throughout the universe.

"We've been studying the Sun for decades and now we're finally going to go where the action is," explains Nasa scientist Alex Young.

Because the Sun is a source of light and heat for life on Earth, finding out more about it may help scientists to understand how life on Earth developed too.

The probe will be carrying a variety of instruments to gather information to answer some important questions.

1) Why do solar winds speed up? 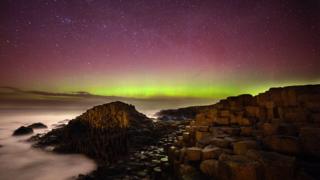 Martina Gardiner
Have you heard of the Northern Lights? These are actually caused by solar winds interacting with the Earth's atmosphere

Scientists hope the probe will tell them more about solar wind, which is basically charged-up particles called plasma that are chucked out from the Sun and escape its strong gravitational pull, before racing across the Solar System.

They already know that solar wind accelerates to supersonic speeds as it moves through the Sun's outer atmosphere, called the corona - but they don't know how. So, by sending the probe into the corona itself, it is hoped they will find some answers to this.

2) Why is it hotter around the Sun than actually on it? 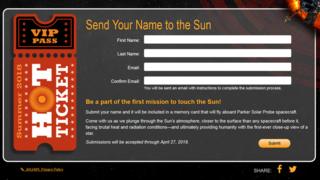 NASA
This is the form that people around the world had to fill in if they wanted their name to be sent to the Sun!

Another puzzling mystery about the Sun is that its outer atmosphere is actually hotter than the temperature on the surface.

The surface of the Sun is about 5,600C. Given the temperature of lava from volcano eruptions is between 700C and 1,200 C, that gives you an idea just how hot that is. But the corona is millions of degrees Celsius, which makes very little sense indeed.

"It's a bit like if you walked away from a campfire and suddenly got much hotter," explains project scientist Nicky Fox. So scientists want to work quite what on Earth is going on there!

The mission also gave people around the world a chance to send their name to the Sun too. All the names will be put on a microchip aboard the space craft (unfortunately the deadline has now closed!).

Why won't it melt?

One of the main questions on everybody's lips is... why won't the Parker Solar Probe melt?!

According to Nasa: "The spacecraft will travel through material with temperatures greater than a million degrees Fahrenheit while being bombarded with intense sun light."

In order to protect the spacecraft, Nasa has been busy making a special shield to protect it from the intense heat and energy. This will allow it to get more than seven times closer to the Sun than any spacecraft has come before.

The shield will actually mean that inside the probe, it will be room temperature - despite being MUCH hotter on the outside.

Why is this mission so special? 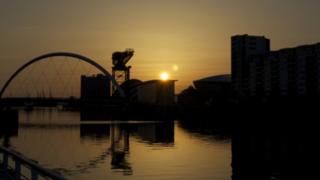 As the Parker Solar Probe travels through the Sun's corona, it will give scientists the chance to perform the closest-ever observations of a star.

It is hoped that the mission will help scientists to explore the answers to questions about the Sun that have baffled them for years.

It may also provide information about other stars in the universe and how our Sun helped life to develop on Earth.

It won't be easy to launch the mission. In fact, the launch energy needed for the spacecraft to reach the Sun and get into the right orbit pattern is actually 55 times that required to get to Mars.

"During summer, Earth and the other planets in our solar system are in the most favourable alignment to allow us to get close to the Sun," explains Yanping Guo, a scientist working on the launch.

It is also the first Nasa mission to be named after a living person - a scientist called Eugene Parker. In 1958, he published a paper about the existence of solar wind, which this mission will be investigating.