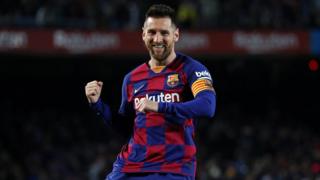 He scored two sublime free-kicks and a penalty against Celta Vigo in La Liga, restoring the Spanish giants' lead at the top of the table.

Here are some more facts and figures from this record breaker's career.

Cash in the bank

Messi was named the highest paid athlete in the world in June 2019. 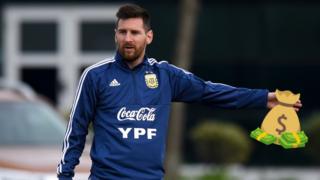 Another football star to make the list was Paris Saint-Germain's Neymar player Neymar. He came third with a total of $105m (£82.5m).

What could you buy for the price of Neymar?

It's golf, but not as you know it! 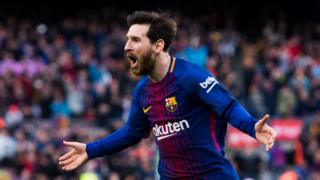 In May 2019, Lionel Messi scored his 600th goal for Barcelona in their 3-0 win over Liverpool in the Champions League.

The landmark goal was an amazing long-range free kick and was scored exactly 14 years to the day since his first ever Barcelona goal! 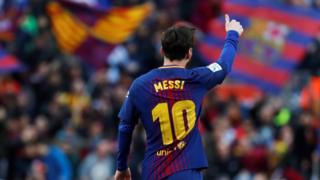 Getty Images
Messi is the only player in history to score 40+ club goals in 8 consecutive seasons
How many goals has Messi scored?

Lionel Messi is a goal machine - there's no better way to put it. He simply scores for fun and over the last few years he's broken quite a few records in the process.

He is the all-time top-scorer in the Spanish league La Liga, with 427 goals - at least 100 more than any other player!

In 2012, Messi broke a 40-year-old record held by the German legend Gerd Muller when he set a new record for the most goals in a calendar year - 91 and if you include friendly games that number rises to 96.

During the 2012-13 season, he managed to scored in 21 games in a row in La Liga, which is an unbelievable achievement. He only failed to score in four league games that season. 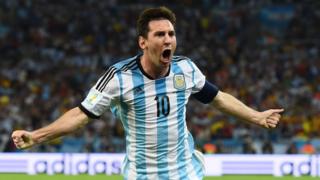 In 2012, he became the first player to score five goals in a single Champions League game - that was against Bayer Leverkusen.

How many trophies has Messi won?

Lionel Messi has helped his club and country win a fair few trophies thanks to all of the goals he's scored during his career. 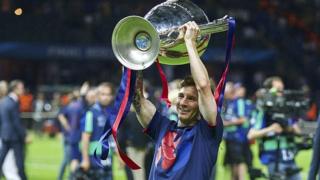 Since his first match for Barcelona in 2004, Lionel Messi has won a whopping 30 trophies with Barcelona. 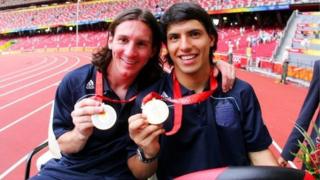 Getty Images
Messi won an Olympic gold medal with Argentina in 2008 alongside Sergio Aguero, who now plays for Manchester City

But that's just for Barcelona. He's also won an Olympic gold medal with Argentina at Beijing 2008 and he also won the under-20 World Cup.

Last but definitely not least, as well as all of his goals and trophies, he's also won plenty of personal accolades, including an astonishing five Ballon D'Ors when he was voted the world's best footballer.

What's it like living over the road from Lionel Messi?

The worlds first ever happiness museum is open