St David's Day 2021: Everything you need to know 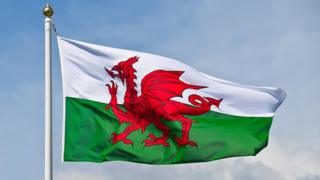 Today is St David's Day! St David is the patron saint of Wales and he is celebrated on the 1 March.

To mark the day, Welsh people around the world wear one or both of Wales's national emblems - a daffodil and a leek. Special concerts and parades are also held in St David's honour, although this year celebration's will be different because of coronavirus restrictions.

Patron saints are chosen to be special protectors or guardians over all areas of life.

England, Ireland and Scotland also have their own patron saint, to whom they dedicate a day.

Who was St David?

St David - or Dewi Sant in Welsh - was born on the south-west coast of Wales, near to where the city of St Davids is today.

We don't actually know the exact year when he was born, but it is believed to be some time in between 462 and 515 AD.

There are many stories about miracles happening around St David. 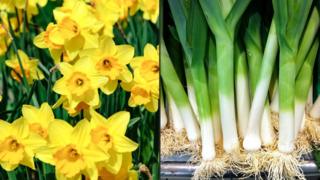 Getty Images
Daffodils and leeks are national emblems of Wales

One of the famous stories is from when he was speaking to a large crowd and someone in the crowd shouted: "We won't be able to see or hear him." Then, the ground David stood on is said to have risen up so that he was standing on a hill, making it easier for everyone to see him.

How is St David's day celebrated?

Celebrations this year will be very different due to current coronavirus restrictions limiting what people can do.

Normally, a National St David's Day parade is held in the centre of Cardiff every year, with lots of exciting performances by dragons and theatre groups. Usually, many children take part, wearing traditional Welsh clothing and performing traditional dances.

Across the country, lots of towns and villages host their own parades and concerts, while many of the country's castles and heritage sites let people come to visit them for free.

Traditionally, there is also a famous concert held on the day at St David's Hall in Cardiff, with the BBC National Orchestra and Chorus of Wales performing Welsh songs. 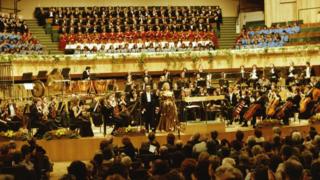 The St David's Day concert has been taking place for a long time. Here's a picture from the concert in 1984!
3 facts about St David

1. He was a vegetarian

St David and his monks ploughed fields by hand and didn't eat meat. It is also believed that St David himself only ate leeks and drank water.

2. His words live on

His last words to his followers before his death are thought to have been: "Be joyful, keep the faith and do the little things that you have heard and seen me do." The phrase gwenwch y pethau bychain mewn bywyd - 'Do the little things in life' - is still a well-known phrase in Wales.

It is said that he went on a special religious journey to Jerusalem and brought back a stone with him. The stone now sits on an altar in St David's Cathedral, which was built on the site of David's original monastery. 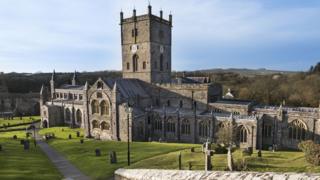 Getty Images
This is St David's Catherdral in the city of St Davids
Learn to speak Welsh!