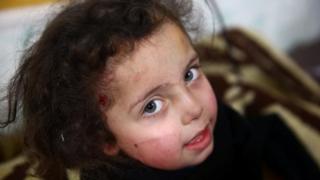 Reuters
Children have been injured in the fighting in Eastern Ghouta, Syria

A new ceasefire is underway in the war-torn country of Syria in the Middle East.

There has been a war in Syria since 2011. Many people have escaped the country but there are still lots of families living there.

The UN Security Council, which is made up of 15 countries including the UK, has approved a deal to stop fighting for 30 days there, to allow aid deliveries and medical help.

This week, the area of Ghouta - which is about the same size as Manchester in the UK - has been hit with lots of bombs by government forces.

The Syrian government has denied targeting civilians and said it is trying to free the Eastern Ghouta from "terrorists" operating in the area.

Charities say more than 500 people have died there since last Saturday. Hundreds more have lost their homes.

The United Nations vote had been delayed several times since Thursday as members struggled to come to an agreement.

Countries meet to try to stop fighting in Syria