Countries meet to try to stop fighting in Syria

A group of countries are meeting to try and agree a plan to stop the fighting in the country of Syria.

There has been a war there for more than seven years. Many people have escaped the country but there are still lots of families living there.

This week, the area of Ghouta - which is about the same size as Manchester in the UK - has been hit by lots of bombs.

Charities say more than 400 people have died there in the last 7 days. Hundreds more have lost their homes. 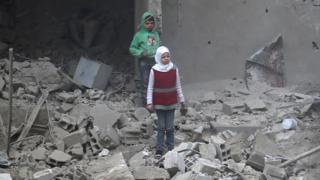 Lots of leaders have been talking about what to do but so far no one has been able to agree how to stop the war.

The UN Security Council is made up of 15 countries including the UK. It's meeting in New York to try to get the fighting to stop for at least 30 days. That would mean people who'd been hurt could get medical help safely.