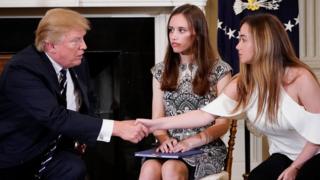 Survivors of a school shooting in Florida, USA, have told President Donald Trump that they want tighter gun controls.

They called on him to make sure that an attack, like that which left 17 people dead on 14 February, does not happen again.

Mr Trump listened to stories from about 40 students, teachers and families from Marjory Stoneman Douglas High School during Wednesday's event at the White House in Washington DC.

One of the ideas President Trump put forward was to give guns to teachers.

A staff member with a gun could prevent future shootings and end an attack "very quickly", he said.

The US president also backed calls for improved background checks on gun buyers.

"We'll be very strong on background checks, very strong emphasis on the mental health of somebody," Mr Trump told the students.

Meanwhile, survivors of the shooting poured into the Florida state capital to demand politicians limit the sale of guns like assault rifles.

It was the first organised protest of an anti-gun movement led by young people since the attack in Parkland, Florida last week.

In other parts of the US, students in Chicago, Illinois; Pittsburgh, Pennsylvania; and Phoenix, Arizona walked out of classes in support.

Florida shooting survivors on why they want change now