Young survivors of a US school shooting in Florida have announced a national march on the capital, Washington.

They are demanding that President Donald Trump and politicians change American gun laws, which are very different to the strict rules in the UK.

Speaking on US television, student survivors from Marjory Stoneman Douglas School announced their March for Our Lives campaign. 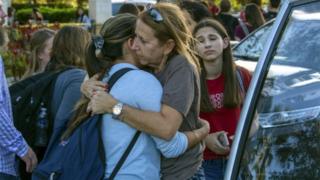 They are planning to protest on 24 March to demand that children and their families "become a priority" to US politicians.

"We are losing our lives while the adults are playing around," survivor Cameron Kasky said.

They want other protests to happen in other cities at the same time on the same day.

What happened in Florida?

On Wednesday 14 February, there was a serious gun attack at a school in Parkland, Florida.

At least 17 people died and several other people were seriously injured.

A 19-year-old former pupil at the school has been arrested, and has confessed to the shooting.

It is the sixth shooting this year at an American school, which has hurt or killed students.

If you find what happened in Florida upsetting, or if anything else in the news is making you feel sad, click here for advice.

On Saturday students and their parents - as well as politicians - took part in an emotional rally in Fort Lauderdale, close to Parkland.

They chanted "shame on you" to US politicians and the president.

President Trump - who on Friday met survivors of the attack - has blamed the shooter's mental health for the attack.

He also criticised the FBI - a US security service - for missing signs before the shooting, after it admitted it had failed to act on information about the suspected gunman.

Guns in the US: Kids tell us what they think