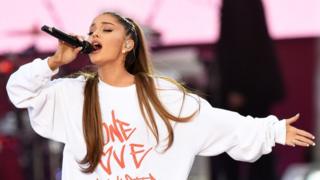 The singer has been recognised at the NME awards which are an annual music awards show in the United Kingdom.

It's for how strong she was after an attack at one of her concerts in Manchester last year.

The One Love Manchester concert she organised afterwards picked up the best music moment prize.

She organised it to raise money for the survivors and families of those killed.

Manchester attack: How kids feel about what happened at Ariana Grande concert