Scientists have made a model of what they think is the face of Britain's oldest complete skeleton.

The skeleton is known as Cheddar Man because was found more than a century ago in Gough's Cave in Cheddar, in Somerset.

Scientists have studied his DNA, and rebuilt what he might have looked like - saying he would have had a darker skin than previously thought, along with blue eyes and dark, curly hair.

Professor Ian Barnes, who is in charge of the research at the Natural History Museum, said "It's that combination of features that make him look not like anyone that you'd see today. " 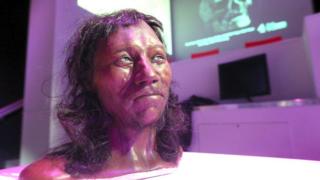 Jonathan Brady/ PA Wire
The skeleton's skull was scanned and a 3D model was made by artists Alfons and Adrie Kennis, who make life-like reconstructions of extinct mammals and early humans.

"Not just dark skin and blue eyes, because you can get that combination, but also the face shape."

It's believed that Cheddar Man died in his twenties, had quite a good diet, and lived in Britain when there was hardly anyone else living there.

His ancestors migrated to Europe from the Middle East after the Ice Age.

Neanderthals lived alongside humans for 5,000 years