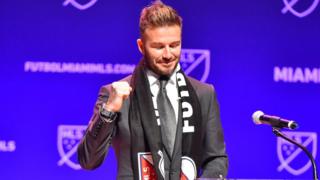 The former midfielder is launching a team in Miami, Florida.

They'll compete in Major League Soccer in the United States - where they could face another of Beckham's old teams, LA Galaxy.

"I'm excited to bring this great team to this great city - it has been a hell of a journey," said the 42 year old.

"I promise you the team we will bring into the league will be the best team."

Beckham and the other owners announced they are going to build a 25,000-seat stadium in a part of Miami called Overtown.

Along with the stadium, there are a few other things the team needs before it can play its first game: a name, a coach, somewhere to train, oh, and some players.

Five AMAZING football comebacks from over the years