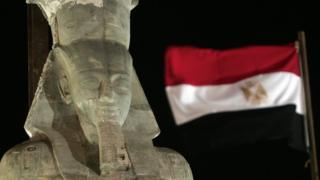 Outside Newsround HQ there are always people wandering around.

Maybe a glance out of your school's window today could have revealed a few cars passing by, or a little bird, just chilling.

However, if you were in the city of Giza in Egypt on Thursday, you could have seen a 3,200-year-old statue of an ancient Egyptian pharaoh passing by...

And looking at the speed the statue was moving, it was causing one big traffic jam...

Experts believe the public loved him; he led several successful military expeditions and his Egyptian nickname was Ramesses the Great.

Broken up and put back together

His statue was first discovered in a temple by an Italian explorer in 1820.

Since then it's been broken into six pieces, stuck back together, and moved to a few locations, before being moved again.

Basically, he's had a bit of a rough time of it.

This latest adventure didn't take him that far though.

The statue was actually just being taken out of storage and into its new position on the atrium at the soon to open Grand Egyptian Museum.

Two ancient mummies have been found in Peru