Could poo-power light your street?

It sounds like a pretty smelly source of light!

But one man in Worcestershire has invented a special gas-lit street lamp that uses dog poo as fuel.

Brian Harper made a special machine where people simply put their dog waste in to power the lamp!

Once put into the lamp, the dog waste is broken down by microbes, producing methane which fuels the light. Brian says that ten small bags of poo could keep the light going for two hours each evening.

It's the first dog-poo powered street lamp in the UK, and it also produces fertiliser! 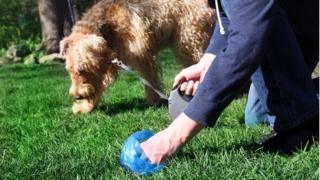 Brian told the BBC there's a problem of plastic bags being left in trees. He says a lot of poo is picked up off the ground but then gets thrown into undergrowth.

"I thought, there must be a way of giving dog poo a value, so people do something sensible with it."

Is this a pants idea?

Not necessarily! This is far from the first time poo has been used as fuel.

In many countries around the world, including Mongolia and Pakistan, animal dung is sometimes burned on fires to produce heat.

It's an idea that's also become more accepted in the UK too.

In 2014 Birmingham became the first place in the UK to use poo to heat homes, in 2015 a special machine that turned poo into water and electricity was invented, and in India, poo has been used as charcoal, to heat homes. 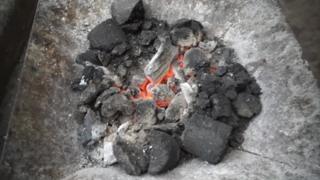 Charcoal made from poo

Most of these idea's use technology similar to Brian's machine - by breaking down the poo into the different chemicals that make it up.

Some politicians in Canada have also come up with an idea quite similar to Brian's.

They're asking dog walkers to drop off their pet's poo at collection points, where it's then taken to a special central plant to be broken down with other forms of organic waste. This produces methane and then electricity.

Brian started building the machine three years ago, after he got fed up of people dumping their bags of dog poo around the Malvern Hills, which is - officially - an Area of Outstanding Natural Beauty. This means the government has said it is an area that needs to be looked after... which really doesn't mean leaving bags of dog poo lying about. 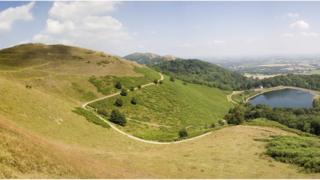 Getty Images
The Malvern Hills, an Area of Outstanding Natural Beauty, is where Brian has tested his poo lamp.

Brian got money from the Malvern Hills Partnership, who care for the area, to help develop and build his unusual invention.

He now wants to try and get people who look after parks in cities and other areas interested in the poo-power street lamp.

The fight against dog poo

How do you convert poo into energy for your home?

How poo is being turned into power

Wee power that can charge a mobile phone!