Where does tinsel come from?

It's hard to go anywhere at the moment without seeing Christmas decorations. In shops, in the street, in sitting room windows - they're everywhere!

One of the most famous Christmas decorations that people love to use at Christmas is tinsel.

So you might think that using it is an old tradition and that people in the UK have been adorning their houses with tinsel for a very long time.

But that is not actually true. Tinsel is in fact believed to be quite a modern tradition in the UK.

We owe a lot of our Christmas traditions in the UK to the Victorians.

But despite them loving Christmas, there isn't actually any evidence that Queen Victoria used tinsel on her tree. 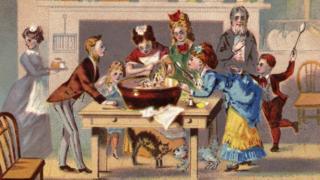 So where did it come from?

Well, the idea of tinsel dates back to 1610 to a place in Germany called Nuremberg.

Silver was very expensive though, so being able to do this was a sign that you were wealthy.

Even though silver looked beautiful and sparkly to begin with, it tarnished quite quickly, meaning it would lose its lovely, bright appearance.

So it was swapped for other materials like copper and tin. These metals were also cheaper, so it meant that more people could use them.

However, when World War I started in 1914, metals like copper were needed for the war. Because of this, they couldn't be used for Christmas decorations as much, so a substitute was needed.

It was swapped for aluminium, but this caused fire scares. So it was switched for lead, but that turned out to be poisonous! So people weren't having much luck picking a metal that would work.

Today, tinsel is made from a material called polyvinyl chloride - or PVC for short.

The PVC is given a special treatment to make it nice and shiny, before it is shaped into bands which can be used on a tinsel machine.

Check out the video above to see how it's made at the UK's biggest tinsel factory. 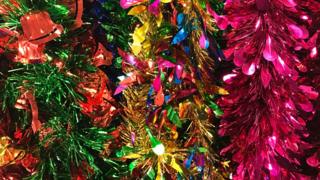 Getty Images
Nowadays, you can buy tinsel in all shapes and sizes.

When did tinsel actually come to the UK? The truth is that nobody actually knows.

During the 17th century - when it is widely agreed that the tradition of tinsel first began - Britain had strong links with Germany, so it wouldn't be unsurprising if Britain did copy the tradition.

But the fact that the Victorians didn't appear to use tinsel suggests that it is a much more modern tradition than that.

So, it seems we may never know for sure!