Brexit: The situation by December 2017 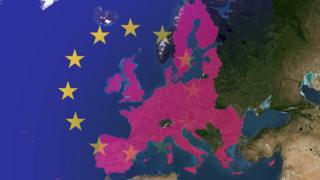 The pink area shows which countries are currently in the EU

OK, so you've probably heard the word Brexit a lot by now.

It's well over a year since the UK voted to leave the European Union (EU) and it's a pretty big deal.

The UK will no longer be part of a group of 28 countries which work together and it's taking a long time to sort out - especially as no other country has done this before. 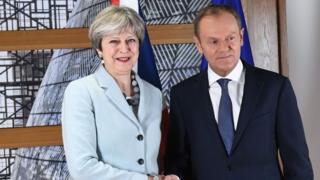 AFP/Getty Images
Prime Minister Theresa May has been in Brussels. She was welcomed by European Council President Donald Tusk.

Prime Minister Theresa May has been in Brussels trying to agree with EU leaders what will happen when we're 'out'.

Three key things have been given the green light so far:

There's big news for people and families who've moved to the UK from other EU countries, such as France or Spain.

People who are already in the UK have been given a guarantee that they can stay.

The same goes for anyone from the UK who's moved to a different EU country. 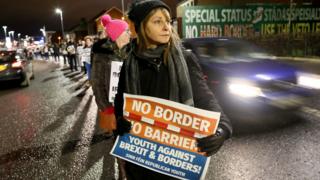 Getty Images
There have been protests against a possible 'hard border' in Ireland.
Northern Ireland Border

One of the big question marks has been over what will happen to the Northern Ireland border.

The Republic of Ireland is still an EU member so this would be the only place on land where the UK and the EU meet.

At the moment there are no checks on goods or people going between the two countries, but some have been worried that Brexit could change this and mean border checks are brought in.

However, Theresa May says an agreement has been reached which will guarantee that there'll be "no hard border". A hard border is one where there are lots of checks on people and goods going backwards and forwards.

The details of exactly how this will work in the future are still to be decided.

A lot of people have compared Brexit to a divorce and you might have heard them talk about a 'divorce bill'.

The UK has agreed it will pay the EU when it leaves.

Theresa May has said the bill will be "fair".

No figure has been confirmed, but it's estimated it could be between £35 and £40 billion.

This 'exit bill' could cover anything the UK has already said it will pay to the EU. 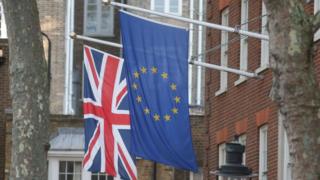 So although it seems as though three key points have been agreed the talks aren't over and we won't leave the EU until March 2019.

There's still so much more to decide, for example around business and trade.

Any agreement also needs to be approved by the leaders of the remaining twenty-seven EU states.