What's the deal with this 'very weird' looking dinosaur? 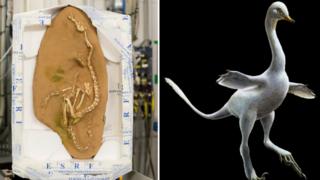 But the fossil of this weird reptile has been discovered by scientists, and is classified as a dinosaur.

The creature had a long neck, but also sharp claws, a tail like a reptile and a beak lined with teeth. Wow!

It's been given the name Halszkaraptor escuilliei, and is thought to have been around 75 million years ago, and lived on both land and water.

The fossil came from Mongolia, and is thought to have been stolen from someone's private collection.

It's so unusual even palaeontologists, whose job it is to study fossils, think it's a bit freaky!

The team were so surprised when they first saw it, that their first step was to make sure this fossil was of one creature, and not a mash up of lots of different ones just joined together.

They say the new creature was a primitive member of a group of dinosaurs known as Dromaeosaurs, which includes velociraptors.

The discovery has been published in the journal Nature.

Using a high resolution scanning technique, the team were able to study the fossil, even though it was still partially embedded in rock.

The scientists said that this not only showed that the remains were from just one creature but also revealed hidden details. 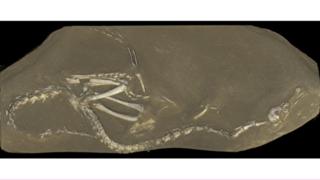 Palaeontologist Vincent Fernandez, who has been researching the new dino , said: "What is very special about it is that it looks very weird."

"It doesn't look like any other dinosaur that we know so far."

The new fossil is believed to have been unearthed in the Gobi Desert in an area of southern Mongolia known as Ukhaa Tolgod.

It's an area where lots dinosaurs lived.

It's thought that the creature's body was about the size of a modern duck, but with a long tail and longer legs.

They also think it had a nerve and blood system in its nose similar to that seen in crocodiles but scientists think its skeleton suggests it would have moved on land walking upright, more like a bird!

Keeping active more important than ever for mental health

1 hour ago1 hour ago
8
Newsround Home