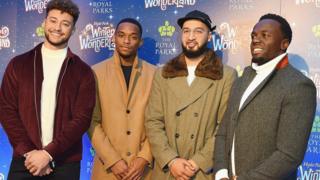 Rak-Su are the first ever boy band to win the X Factor!

They beat singer-songwriter Grace Davies to be crowned champs during the final.

The group looked stunned when Dermot O'Leary called out their name, before hugging each other and their mentor Simon Cowell.

Simon told the boys: "You are stars!"

They've now released Dimelo, which is their winner's duet with Wyclef Jean and Naughty Boy.

It's a charity single with money going towards children's hospice charities Together for Short Lives and Shooting Star Chase.

The X Factor 2017: Who are the finalists in the live shows?

Comments: Who do you want to win The X Factor - Grace or Rak-Su?

X Factor: Get a first look at judges' houses

What can we expect from the new series of The X Factor?