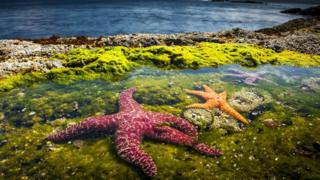 As always, this week's Blue Planet II will be full of amazing wildlife and amazing scenes of survival in our earth's oceans.

Say hello to beaches, cliffs, and all the wildlife that lives along the coasts!

Blue Planet II's coasts episode will look at how wildlife survives in an ever-changing part of our world.

So expect more heart-stopping action than at a great white sharks birthday party.

As usual you can be sure this week's episode will be full of weird and wonderful characters, living out their lives on Earth's coasts. 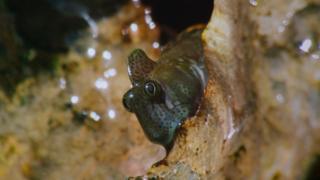 Find out more about the life of a Pacific blenny in this week's episode. You'll even get to see how they attract a mate!

This tiny faced fish is a Pacific blenny and it is really, really small. These creatures spends most of their lives right on the shore line, where the waves crash onto the rocks.

As the waves break, the blenny flicks itself away from the water with its powerful tail.

At around 3 inches long, this little creature presented quite a challenge to the film crew who wanted to capture this behaviour.

Cameraman Rod Clarke had to sit on a little stool, up to his chest in water to keep an eye on the blennies.

As always, teamwork was key, with the director on hand to warn him to move the camera to safety from the path of a particularly big waves!

We also get to follow one of these little fish in its search for love. The crew found a male blenny and captured its peculiar, and very cool, mating dance.

Will his moves be enough to help him attract a partner? You'll have to watch to find out. 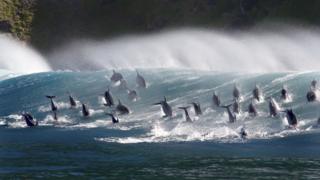 Snubfin dolphins hunt in very shallow water, usually only around a metre deep. This means they can get right up to the shore line where their prey lives.

These wave riders of the natural world are Snubfin dolphins and can only be found on the Northern Rim of coastal Australia.

They have large heads, cute faces (of course they do, they're dolphins!), and an almost permanent smile.

And the dolphins aren't just a little odd looking. They also display some odd behaviour too. Scientists have seen them rising out of the water to spit!

Scientists aren't totally sure why they do this, but looking at the footage it seems the spit is to distract fish in front of the dolphin.

This pushes them back towards the hungry Snubfins. What a cunning plan!

One of the main issues the film crew had was capturing this behaviour on camera.

Trying to predict where the dolphins were going to pop up and start spitting was very challenging. It took three and a half weeks before the Blue Planet film team caught the perfect moment.

The dolphins hunt in very shallow water right on the beach, waiting till the tide comes in before coming in to hunt.

They whip up mud with their tails as they stand on their head, flushing out the fish, before stunning them with a slap of the tail.

Your comments: What was the best part of Blue Planet?