Fake News: Should you learn about it in school?

Fake news has been one of the most talked about subjects of the year.

But what is it? What does it mean to you? And should you be taught about it in school?

One expert thinks children from the age of 10 should have classes teaching them how to spot fake news on social media.

A team from the University of Salford went to schools around the UK, doing workshops with kids in Year 5, Year 7, and Year 9.

The children they spoke to talked about the news they read, where they get it from, who they trust to be truthful and how they know if news is true or not.

Beth Hewitt, who was in charge of the project, told Newsround:

"Lots of children understand that fake news exists but can they really spot it when they see it in the real world? That's where lessons would help.

This is important because if young people stop feeling they can believe the news is true, they could stop trusting the media at all. and even switch off from finding out what's happening all around the world."

What IS 'fake news'?

Fake news means stories that you see on social media and online, that aren't true.

News that's 'fake' is usually either -

What's the problem with fake news?

There have always been fake news stories, but with social media and the internet, it's become much easier for false stories to be spread all around the world, with many people publishing these stories in order to get as many shares as possible.

But why does fake news happen? Why do people do it? The truth is it's for lots of different reasons.

Now experts are worried that lots of people, including children, see so much fake news they don't what's true and what isn't.

They're also worried that young people will stop feeling they can trust ANY news that they read, and will just switch off instead of wanting to learn what's going on in the world. 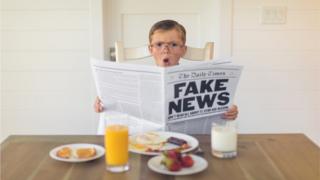 As well as asking you, Newsround asked the government and a group that represents head teachers what they thought of the idea of lessons to help kids spot fake news.

The Department of Education, who are in charge of schools in England and Wales, told us that school curriculum has lots of places where fake news could be discussed.

They pointed out that Personal, Social, Health, and Economic Education (PSHE) classes already allow teachers to cover areas like media, advertising, and the safe use of social media.

"Children and young people need to learn... to stay safe in a digital world. This includes being able to evaluate what they find online and make decisions about whether it is reliable and accurate or if it is fake news.

The NAHT thinks PSHE helps prepare young people for the challenges they will encounter in their adult lives and the current challenges they face beyond the school gates. "

What do kids think?

In November 2017 Ofcom - the group in charge of monitoring what goes on TV and radio in the UK - did a survey.

It suggested that more than half of children aged 12 to 15 got their news from social media platforms like Snapchat, Facebook and Twitter. The only news source more popular, was the news on TV.

Three-quarters said they were aware of fake news, and nearly half said they had seen a fake news story.

Of those who had heard of fake news, more than 8 out of 10 said they would try to check to see if it was true or not.

So did they say they would do it? 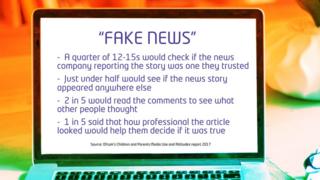 Newsround
How do YOU spot fake news?

A lot of the best ways to spot fake news are things you would do anyway if you weren't sure - like asking someone who you trust what they think.

But if you want to try to make sure that you don't get caught out by fake news, there a few things you can look out for when you read something on social media.

And why not test yourself with a fake news quiz?

How do you spot fake news?