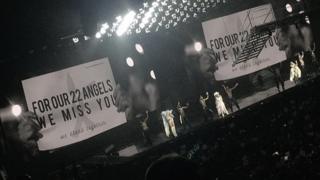 Little Mix and their fans have paid tribute to the victims of the Manchester terror attack.

The group were performing at Manchester Arena on Wednesday night, six months on from the attack.

To mark the anniversary, Little Mix fans took signs to the concert, which read: 'For our 22 angels. We miss you. We stand together.' 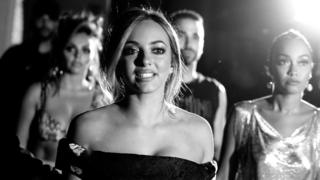 Getty Images
Little Mix, pictured here at a concert in the USA earlier in the year, called the concert "incredibly special".

On 22 May, thousands of people had just watched Ariana Grande perform at the same venue when an explosion near the exit killed 22 people, and injured hundreds more.

Little Mix tweeted about their fans' signs, saying: "Tonight was incredibly special. Thank you to the incredible audience for organising this and showing nothing but love in the arena tonight #GloryDaysTourManchester the girls xx".