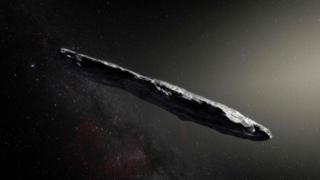 AFP
This is what an artist thinks the huge comet looks like. Astronomers tests say the object is very, very dark and absorbs 96% of light shone on it.

Earlier this month we told you about an alien asteroid found by scientists in Hawaii.

Well now astronomers are pretty certain that the massive object is definitely from outside of our solar system!

Not only that, they think that it could be one of 10,000 other alien rocks that could be zooming around, undetected in our solar neighbourhood.

The astronomers named the asteroid 'Oumuamua', which is Hawaiian for messenger or scout.

One of the things that makes this rock super special is that the rock is the FIRST to be discovered that formed in another solar system and travelled to our solar system.

What is a Solar System?

Another even more exciting thing is that scientists think that the asteroid is red in colour, which is a very good sign it is covered in living, organic molecules! 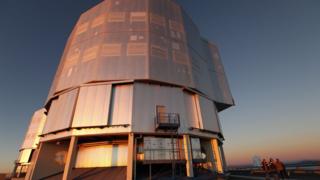 This is the European Southern Observatory's Very Large Telescope (yes, that is it's real name) and it was used by a team of astronomers from Hawaii to find out more about 'Oumuamua asteroid

This could back up some theories that life on earth began with organic molecules travelling to our little planet from another solar system on an asteroid.

Scientists are also excited because 'Oumuamua could tell us a lot about how planets are formed in the solar system is has travelled from.

The smallest and biggest things to go to space

The Northern Lights seen from space