Leonid Meteor Shower: How can you see it? 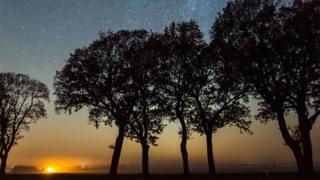 Getty Images
Leonid meteors will be zooming across our skies tonight

The Leonid meteor shower will be streaking across the night skies tonight.

The shower starts on 15 November, but it is believed it will reach its peak at the weekend.

Read on to find out more about the shower and how you can see it. 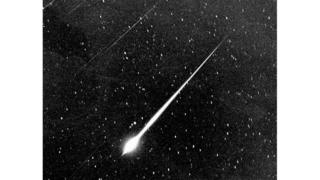 The shower happens each year when the Earth's passes through a trail left behind by Comet Tempel-Tuttle.

Tempel-Tuttle is what NASA calls a small comet - but it is still 2.24 miles across! It takes 33 years to go around the Sun.

Its trail of dust and ice particles are what create the meteor shower in the night's sky.

Every 33 years, the Leonids shower becomes a storm. This is when there are thousands of meteors an hour, instead of the ten to fifteen we are likely to see tonight.

The Leonid meteors are named after the Leo constellation.

Leo is a Latin word which means Lion. The constellation is named Leo because it looks like a crouching lion.

The Lion's mane and shoulder are often referred to as 'The Sickle'. 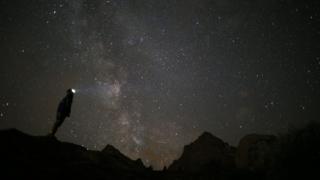 Getty Images
The shower takes place over several days, but it is at its peak tonight

The meteor shower started on 15 November and is expected to finish on 20 November, but the shower is at its peak tonight.

Tonight is a small thin crescent Moon, which means the sky will be very dark.

If the weather is good in your area it could be a perfect night to view the meteors.

How can I see it? 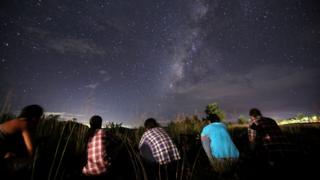 The best way to view a meteor shower is to find somewhere where the night sky will be dark and clear.

Ideally, you will want to find a place away from lots of light pollution.

Meteors are easier to spot in the early morning, or just before dawn. This means you might need to get up early and wrap up warm to view the shower.

If you can find an open area, away from tall trees or buildings, that will help too.

Orionid Meteor Shower 2020: What is it and how can I see it?

How to watch the Perseid Meteor Shower

What are the Strictly celebs dancing to this weekend?