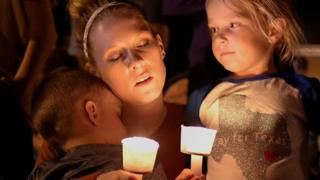 A candlelit vigil has been held to remember those who have died in a shooting attack in the US state of Texas.

On Sunday, a gunman shot at people attending a church service in the small town of Sutherland Springs.

At least 26 people have been killed and 20 others wounded.

Police do not yet know the reason for the attack.

If you find what happened in Texas upsetting, or if anything else in the news is making you feel sad, click here for advice.

The suspected shooter was identified by police only as a "young, white male", and was later found dead in his vehicle some miles away.

President Donald Trump said the gunman was "a very deranged individual" and denied that guns were to blame for the shooting.

"We have a lot of mental health problems in our country, but this isn't a guns situation," he said.

The shooting comes just a month after a gunman in Las Vegas opened fire on an outdoor music festival.

Fifty-eight people were killed and hundreds wounded in the worst shooting of its kind in recent US history.