Orionid Meteor Shower 2021: What is it and how can I see it? 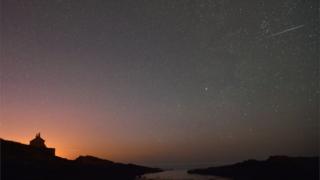 One of Nature's biggest firework displays - the Orionid meteor shower - is taking place on Thursday.

Nasa describes the space-show as "one of the most beautiful meteor showers of the year".

With around 20 meteors zooming through the skies each hour, going at speeds of 148,000 miles per hour, the Orionids are one of the most impressive events in the sky's calendar.

In 2021, the Orionid meteor shower will last from 1 October until 6 November, peaking on Thursday, 21 October.

However, there might be a bit of an issue if you plan to look out for the meteors this year - with the light reflected from a virtually full moon obscuring the view.

The full moon of October is traditionally known as the "Hunter's Moon" and in 2021 happens on Wednesday 20 October. Despite this it will still be pretty full by Thursday, when the shower is due to happen.

What causes the Orionid meteor shower? 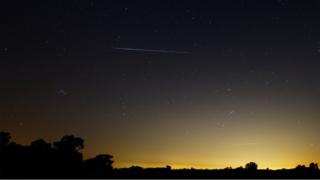 Luis Argerich/NASA
This streak from the Orionids was taken from the Mercedes Observatory, Buenos Aires, Argentina. The dome of yellowish light is light pollution from the big city of Buenos Aires about 100km away

The Orionid meteor shower happens 60 miles up in space, when the Earth moves though a cloud of thousands and thousands of clumps of space rock.

These clumps of rock are actually bits left behind by the famous Halley's Comet, which is only visible from Earth about once every 75 years. 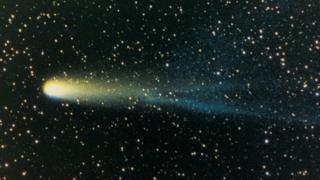 Digital Vision.
The meteors that form the Orionids are leftovers from Halley's Comet. The comet was last visible from Earth in 1986 and won't return until 2061!

Looking to the sky from Earth, the meteors appear to come from the direction of the Orion constellation, which is how they got their name.

When space rocks hit the Moon, they make craters, but when they collide with Earth they burn up as they enter the atmosphere, giving them their bright lights.

The Met Office says "Orionid meteors are known to be very fast, travelling at around 41 miles per second and... with clear, dark skies you still have a good chance of spotting one with its persistent, long trail."

Skull-shaped asteroid to fly past Earth

'Alien object' in our solar system! 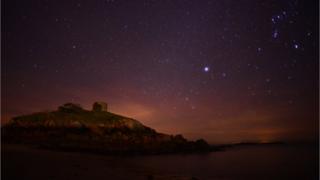 Getty Images
You can see the Orion constellation in the top-right of this picture taken in Portelet Bay, Jersey
How can I see the Orionid Meteor Shower?

The best place to see the Orionid meteor shower (or any meteor shower for that matter), is somewhere dark, away from light, and with the Moon out of your line of sight.

It might be quite difficult in 2021 because the shower peak coincides with a full moon.

It means most of the streaks of light from the meteor shower will likely be overshadowed by the bright moonlight.

However, there's still a chance of glimpsing the Orionid meteor shower. 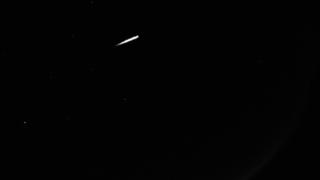 NASA
An Orionid meteor recorded by NASA on top of Mt. Lemmon, Arizona

The best time to spot the meteors is right before dawn, so you might need to get up early and wrap up warm for the best view.

It's best to find a wide open space away from tall buildings or trees, and with as little light as possible.

The more of the sky you can see, the better.

You should be able to see Orionids with the naked eye, but depending on where you are, the sky may be blocked by the Moon, clouds or mist, so if you can get hold of a pair of binoculars that could help you out.