All you need to know about new social media app 'tbh' 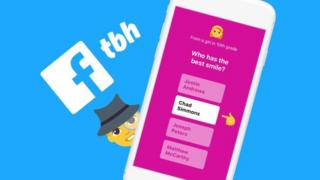 You've heard of Snapchat and Instagram, but have you ever heard of 'tbh'?

It's a new(ish) social networking app, that stands for 'to be honest', and is described as 'an app that encourages young people to be nice to each other'.

It's only been available to download in full for just over two months, only in the USA and only in certain states.

But it's already showing signs of becoming very popular with more than 5 million downloads so far!

BBC Technology reporter Dave Lee says tbh's achievement has been creating an anonymous app without trolling and harassment - something many apps before it have failed to do.

Social media giant Facebook liked it so much, they've bought it for around $100m (£75m).

With Snapchat and Instagram it's all about the pics, the filters, and the stories.

When it comes to tbh, it's all about voting.

Basically the app might ask you a question, for example, which of your friends is: "best to bring to a party?"

Once you've added your friends on tbh, the app will give you a list of four names.

You choose who (in this particular example) would be best to bring to a party, by tapping on their name. 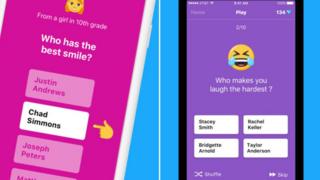 Tbh
What other questions are there?

The party question might be pretty easy to answer, but some of the other questions are a bit deeper and more soul-searching, and others are just plain bonkers!

You might be asked which of your friends you could see becoming a poet, or about which friend is most likely to appear on reality TV.

Or about certain aspects of your friend's personality - for example "which friend do you admire for their perseverance?" or "who is the best shoulder to cry on?"

Or even things like "who has the best handwriting?", "would look good in Crocs?", or who you "can always count on for the freshest memes?".

Can you find out who has and hasn't picked you?

When you answer the question it'll be anonymous - so while your friend will get a notification, in the form of a sparkling gem, when they are picked, they won't know that it's you who picked them.

Although the notification doesn't contain your name, it does include your school year and gender, along with who the other choices were.

But tbh has just introduced direct messages - which lets you message someone who chose you as an answer, and and they have the option of revealing their identity.

The gem you get is pink if a girl picks you, blue if a boy picks you and purple if a non-gender person picks you. They keep track of how many times you've been chosen on tbh.

You can use them to unlock questions and other features in the future. 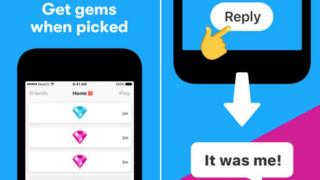 Tbh
How is it different?

People have been describing tbh as a way to compliment your friends, by choosing them when a question that says something nice comes up.

It app itself has the slogan, "tbh is where friends tell you what they like about you. And no —they don't roast you like other apps."

TechCrunch, who review new apps and gadgets, say on their website that most other social media apps are about showing off your offline life, and competing for likes to make you feel good about yourself.

But tbh fills the gap between being "liked" and actually feeling appreciated.

But with a direct messaging function it is possible that, in the same ways as any messaging app, people could send you nasty messages.

There's also the potential that people could choose you as the answer to a question that isn't that complimentary.

But as most of the questions are pretty positive, and the ones that are slightly negative are more silly than mean, - for example "who might run off and join the circus" - hopefully you wouldn't be too hurt by it.

You only know who has picked you for an answer if they tell you, and because you only add your friends on the app, hopefully you shouldn't have any unpleasant experiences using it.

Can you get it? 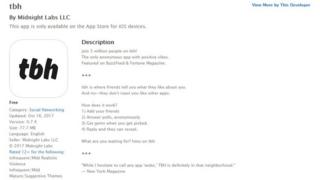 If you're in the UK, then not yet! So far it's only available in parts of the United States, and is gradually being rolled out to different states.

You can also only download the app on a iOS device, so Android users will be left hoping for a wider roll out in the future.

And it's only for teens! Like most other social networking sites, the makers of tbh - a company called Midnight Labs - say you should be at least 13 years old to sign up.

We'll certainly be keeping an eye out for tbh coming to the UK in the future.

Hopefully by then it might give you questions that reflect the country you're in - maybe something like "Who are you most likely to watch Newsround with?" for example.

Do YOU know what social media rules you've signed up to?

What is the fuss about Snapchat's new feature?