Storm Nate arrived in the American state of Louisiana late on Saturday night, classed as a hurricane with maximum winds of 85mph.

It then moved east towards Biloxi, Mississippi, where it was downgraded to a tropical storm.

People in the those states, and in Alabama and Florida, are being moved to safer areas.

The storm has caused flooding, and weather officials are warning there could still be dangerous storm surges. 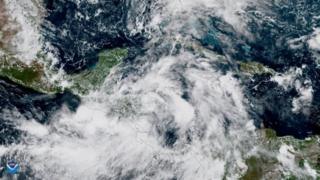 Reuters
This satellite image shows Tropical Storm Nate gaining strength in the Caribbean Sea, as it moved toward the U.S. Gulf Coast

The tropical storm then strengthened to a category one hurricane as it headed across the Carribean Sea towards the US.

But was downgraded from a hurricane to a tropical storm by the National Hurricane Center after it arrived on land.

Although not as strong as other recent storms like Harvey, Maria and Irma, Storm Nate is still causing a lot of damage.

US President Donald Trump on Saturday issued an emergency declaration for Louisiana and Mississippi.

This means the state is allowed to ask for help from the regional government with preparation and possible relief efforts.

In southern Alabama, around 5,000 people were left without power, and while a curfew in New Orleans has been lifted, with people being asked to stay in shelters.

But the impact in the US has, so far, not been as high as people feared.

How one British family dealt with Hurricane Irma