Harvest moon: What is it and when will it take place? 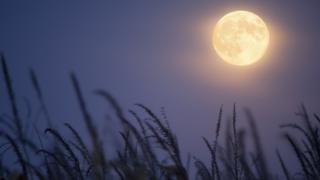 Leaves are beginning to fall, the air is getting cooler and thoughts are turning to Halloween.

Autumn is on its way - and for astronomy fans, autumn also means it's time for the Harvest Moon!

What is the Buck Moon and when is it?

What is the Harvest Moon?

The Harvest Moon is the name given to the full Moon that takes place closest to the autumn equinox.

This means that the Harvest Moon can fall any time between September and October.

What is the equinox?

The Equinox is when the Earth's equator is almost directly in line with the centre of the Sun.

Why is it called a Harvest Moon?

It is called a Harvest Moon because the Moon is particularly bright and rises early.

In the past, this allowed farmers to extend their working day and work by the light of the extra-bright Moon, gathering crops to prepare for the winter months - hence 'harvest'.

Why does the Harvest Moon look orange?

Sometimes people say the Moon turns a deep orange for the Harvest Moon. This effect sometimes occurs if you glimpse the Moon when it is close to the horizon. That's because you are seeing it through the thickness of the Earth's atmosphere, which can cause it to change colour slightly.

When will the Harvest Moon happen?

The best night to view this autumn's Harvest Full Moon will be at 12:54am on 21 September but if, like most of us, you're in bed by then, you can still view it the day before or after.

The Autumn equinox is on 22 September, so the full Moon closest to this date is actually before the equinox this year. 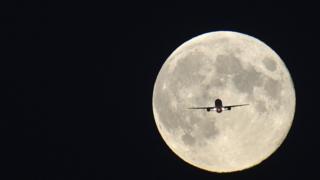 Reuters
How can we see the Harvest Moon?

Provided the weather is clear, it should be relatively easy to get a good view of the Harvest Moon.

The great thing is that you don't need a telescope to see it! Although keen stargazers might use one to get a closer look.

When it gets up into the centre of the sky, it will be shining a brilliant white. Let's hope it's a clear night!

What's happening in space this year?

Just how big is space?

Amazing shots of Earth from the skies above

The next full Moon to grace our night skies will be the Hunter's Moon - the 10th full Moon of the year.

Like the Harvest Moon, the Hunter's Moon is brighter and shines for longer, traditionally giving hunters more light to catch food.

How do we know the Moon landing definitely happened?

What are equinoxes and solstices?