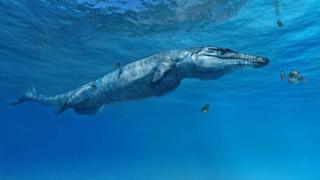 A new prehistoric sea monster has been discovered - after one of its fossils spent almost 150 years sitting in a museum.

The ancient reptile is called Ieldraan melkshamensis, or the Melksham Monster, after the Wiltshire town where the fossil was originally found.

The fossil has been owned by the Natural History Museum since 1875, but sat in its archives until a closer look revealed it held information about the new dinosaur - a distant relative of today's crocs!

The ancient dino croc was 10ft-long with strong jaws and serrated teeth that allowed it to feast on large prey, such as prehistoric squid. Dinosaur experts at the University of Edinburgh investigated the fossil, and used the monster's distinctive skull, lower jaw and teeth to identify it as a new species, from the Jurassic era - that's 145 to 200 million years ago.

Dr Steve Brusatte, from the University of Edinburgh, said: "The Melksham Monster would have been one of the top predators in the oceans of Jurassic Britain, at the same time that dinosaurs were thundering across the land."

The first dinosaurs could have come from the UK

Schools closed in England until at least 8 March says PM

Government under fire over pesticide that harms bees