The satellite, which means fellow-traveller in Russian, was the first man-made object to go into orbit around the Earth and it marked the start of the space race between America and the Soviet Union.

Blasting into orbit on 4 October 1957, it had four giant antennae and its job was to send 'messages' back to Earth via radio signals - another thing that had never happened before.

The messages were sent by a radio transmitter inside the satellite. These were beeps that could be listened to by people at home without special equipment.

The satellite orbited the earth 90 times a day getting slowly closer to our atmosphere.

On 26 October 1957 the beeps stopped and it burned up on 4th January 1958 while re-entering Earth's atmosphere.

Jodrell Bank and the Lovell Telescope

Although many people could monitor the beeps from Sputnik as it orbited Earth, the government wanted to keep track of the rocket on which it was launched.

They asked the people at Jodrell Bank, an observatory in Cheshire, to add a radar onto their radio telescope to track the rocket.

This was the start of a long relationship between the Lovell Telescope, Jodrell Bank and the space race.

Not long after the successful launch of Sputnik 1, the Soviets launched Sputnik 2 on 3 November 1957. This one had a passenger though - Laika the dog.

She was picked from 10 dogs and became the first living thing sent into orbit, paving the way for human space travel.

The Americans wanted to catch up and soon launched their own satellites. They even went to Jodrell Bank to learn more about their technology.

In 1958, Nasa was created and space travel has continued to grow ever since. With the creation of the International Space station, countries work together these days to continue to explore space.

The future of space travel?

Do you fancy going into space yourself? Well. soon space travel might not just be for astronauts!

Two tourists have already paid to be sent around the Moon by US private rocket company SpaceX.

They will skim the surface but won't land or walk on the moon, this hasn't been done for 40 years. Lift off isn't scheduled until 2018 though so they have a little wait.

The company has also released images of what a town or 'base' might look like on Mars. The owner of SpaceX, Elon Musk, hope is that people will be able to visit the red planet as a holiday destination by 2024!

To get there, around 100 people would travel in reusable rockets - at more than 19000mph! 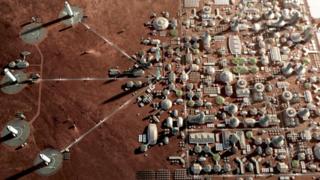 The rocket would then drop off passengers and cargo, and fly back to Earth using a gas called methane, collected from Mars, as fuel for the return trip.

But tickets to the planet don't come cheap - Musk said the first trips could cost up to £770m!

The technology to make this happen right now does not exist and a lot more money is needed to fund such a big plan.

Tim Peake's launch - as it happened

Goals of the century recreated in the garden

Why the Pink Moon won't actually be pink tonight