The gun laws in America are making headlines again after two attacks in Texas and Ohio.

In America, it's not unusual for people to have a gun. Almost every adult can own or carry one.

It is seen as a person's basic right to be allowed to do this. 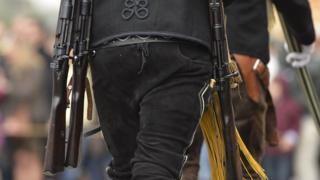 Getty Images
In America, it's not unusual for people to own a gun. Almost every adult can own or carry one

That's because when the country was founded, the right to buy and carry a gun was written into the constitution, which is a list of basic rules that a country is based on.

The only reasons that someone might not be allowed to have a gun would be if they are a convicted criminal, have a mental health illness or if they are not a US citizen.

These rules have been in place since 1791, so buying and owning a gun is something that American people have been allowed to do for a very long time.

However, rules on gun ownership do vary between different US states and there are special laws to prevent people from having guns in certain places like in - or near - schools.

In some states, the rules are less strict than in others. For example, in the state of Nevada, people do not have to tell anyone that they own a gun.

There are also different rules for which different types of guns people are allowed to own and - again - these vary from state to state.

How is it different to the UK?

When incidents happen in the US, you might have questions like, how was the person responsible for the incident able to have a gun to do this? Is it possible for someone to do the same thing in the UK?

The rules are very different in the UK. In fact, the UK has some of the strictest gun laws in the world.

In order to own a gun in the UK, a person needs to have a special certificate called a licence, which is issued by the police.

You need one of these to buy ammunition too.

Certain guns are completely against the law, and you could not buy or own them unless you had special permission from the government. 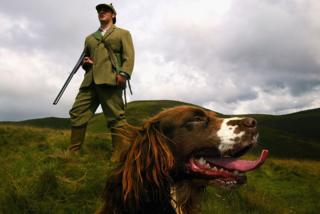 The main difference between the rules in the US and in the UK is that people in the UK do not have a fundamental right to have a gun.

A person has to have a very good reason to have one - and the police have to agree with it.

There are also much stricter checks done before a person is allowed to have a gun, which aim to make sure that individual is not dangerous.

Many believe that strict rules like this are why mass shootings, like in Texas and Ohio, are extremely rare in the UK.

What is the debate in America about?

There is a lot of disagreement in America about whether or not the current gun laws are right. 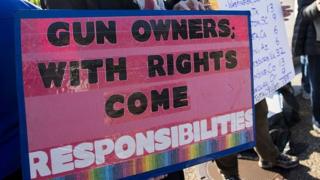 Those who think the rules need to be changed say that shootings like the recent attacks could be prevented if the rules about owning guns were stricter.

Many say there should be more rules about the type of guns that people are allowed to have and more strict background checks to make sure that dangerous people aren't able to get their hands on weapons.

They say that in countries where people aren't allowed to carry guns, fewer people are killed each year by these weapons - so, therefore, America should change its rules. 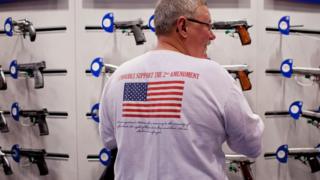 However, people who don't want stricter gun rules say that it is their right by law to be able to have one.

They say they want to be able to use them to protect themselves if they need to.

They also say that if guns were banned then criminals would still have them anyway and ordinary people wouldn't be able to defend themselves if they needed to.

Every time there is a serious attack involving guns, the arguments about the country's gun laws start again.

Even if a president in America thought the rules should be changed and the gun laws needed to be made stricter, he or she can't just change the rules on their own. They would need a lot of support from other politicians, who often don't agree.

Barack Obama, who was president of the US before Donald Trump, said that not being able to deal with gun control was the greatest frustration of his time in the job.

But the current president Donald Trump has said he supports gun owners' rights. 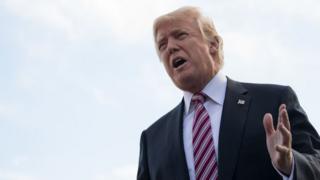 Getty Images
The US president has said he will "never, ever infringe on the right of the people to keep and bear arms"

"Let me make a simple promise," Mr Trump said in April 2017. "I will never, ever infringe on the right of the people to keep and bear arms."

So people right across America cannot agree about what should happen - and it doesn't look like they are going to agree any time soon.