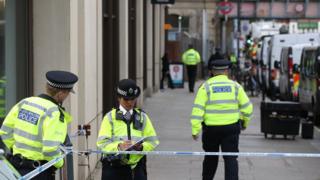 Parsons Green tube station, in south-west London, has re-opened after a bomb exploded on a train there on Friday morning.

No one was seriously hurt by the explosion but 30 people were injured.

Police are treating it as a terrorist incident and have asked the public to remain careful, but said that people should "not be alarmed".

The police say hundreds of detectives are looking into what happened and extra police officers are on the streets to keep people safe.

Five people have now been arrested.

The UK Prime Minister Theresa May said: "The public will see more armed police on the transport network and on our streets, providing extra protection."

The so-called Islamic State group says it was behind the attack but the Metropolitan Police said that they often claim attacks, whether or not they've actually had any previous contact with the people who did it.

The explosion happened at around 8.20 in the morning on Friday 15 September. The police and the fire brigade were quickly at the scene to make sure everyone was safe.

Pictures showed a white bucket on fire inside a supermarket bag, with wires trailing on to the train carriage floor. It's thought the bomb had a timer. 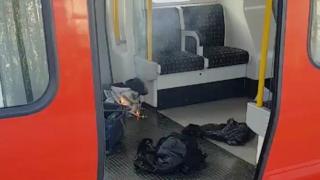 Reuters
A passer-by took this photo of what's thought to be the bomb inside the train.

The station was closed after what happened, but reopened early Saturday morning.

On Twitter, US President Donald Trump seemed to criticise the police in London. The Prime Minister, Theresa May, said it was wrong for anyone to guess about what was happening in the investigation.