Hurricane Irma: All you need to know

A huge clean-up operation is continuing in the US state of Florida to deal with the extreme damage caused by Hurricane Irma.

The destructive storm hit the state on Sunday with heavy rain and winds of around 100 miles an hour.

Millions of people there had already left their homes.

Huge areas in Florida are without power, and parts of the city of Miami are under water.

The storm weakened as it moved northwards but at least four people have reportedly died in the state.

Hurricane Irma has already destroyed parts of the Caribbean, killing at least 37 people there.

The UK has promised £32 million in help and along with France and the Netherlands, are sending rescue teams and emergency supplies to help.

It is estimated 1.2 million people on the islands have been affected by Irma and that could rise to 26 million after hitting the US, according to the Red Cross. 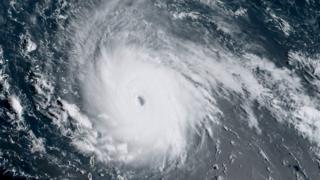 At its strongest, Hurricane Irma had winds of 185 mph and was a category five storm - that's the most powerful.

Weather forecasters say it's the second strongest Atlantic storm ever. The strongest was in 1980 - and was called Hurricane Allen.

Category five hurricanes have winds of 157 mph or higher and damage buildings, trees and power lines.

US President Donald Trump has declared a state of emergency for Florida, Puerto Rico and the US Virgin Islands, organising disaster relief efforts for those areas.

He described the hurricane as a "big monster".

Speaking as he went on an aerial tour of the Keys, Florida Governor Rick Scott said: "Power lines are down throughout the state. We've got roads that are impassable, so everybody's got to be patient as we work through this."

Huge amounts of money will now be needed to care for victims, clean up rubbish, restore power, and repair damage to homes and businesses in Florida.

Other parts of US such as Texas and Louisiana are still dealing with the damage caused by Hurricane Harvey in late August too.

The country hasn't been hit by two big hurricanes in one season in more than 165 years!

Hurricane Irma roars across the Caribbean