What is Eid? What is the difference between Eid al-Fitr and Eid al-Adha?

Millions of Muslims are preparing to celebrate Eid al-Fitr.

It's different from Eid al-Adha, which was last celebrated in July 2021.

Here's everything you need to know about the two Eids and why they're different.

Millions of Muslims start journey to holy city of Mecca 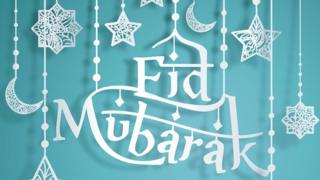 Getty Images
Many Muslims will say the greeting 'Eid Mubarak' on Eid, which means 'blessed Eid'

The word 'Eid' means 'feast' or 'festival'. Each year Muslims celebrate both Eid al-Fitr and Eid al-Adha - but the names often get shortened to just 'Eid', which is why it can be confusing.

Festivals in Islam are based on the lunar calendar - which is around 11 days shorter than the solar calendar, which most people in the world use in their day-to-day life.

The Islamic calendar follows the 12-month lunar calendar which the dates of both Eids change each year, but Eid al-Adha is always a little over two months after Eid al-Fitr.

On both Eids, many Muslims will go to special prayers at their local mosque and have a day of celebrations with family and friends.

Eid al-Fitr - which means 'festival of the breaking of the fast - is celebrated at the end of Ramadan, a month when many adult Muslims fast.

Fasting is important for Muslims during Ramadan as it allows them to devote themselves to their faith and come closer to Allah, or God. It was originated by the Prophet Muhammad, and is celebrated for one to three days, depending on the country. After Ramadan, fasting is forbidden on the Day of Eid.

It usually begins the day after the sighting of the new crescent moon which marks the end of Ramadan and the onset of the month of Shawwal, the tenth of the Islamic Hijri calendar.

Many Muslims will attend Eid prayers at their mosque and it's a tradition to wear new clothes and on the way to the mosque, to eat something sweet, such as a date, and recite a short prayer, called a takbeer.

Eid al-Adha - which means 'feast of the sacrifice' - is celebrated just over two months later, at the same time when many Muslims perform the Hajj pilgrimage.

Eid al-Adha coincides with the end of Hajj - the annual Islamic pilgrimage to Mecca in Saudi Arabia, and is generally considered the holier of the two festivals.

Hajj is a once-in-a-lifetime activity that is a duty for those who can afford it, and who haven't already performed it. Eid-al-Adha is an annual activity celebrated by all.