Solar eclipse 2017: As it happened

One of the most spectacular space sights visible from the Earth swept across the US on Monday.

A total solar eclipse happens when the Moon moves in between the Earth and the Sun, blocking out the Sun's light and plunging areas of the Earth into darkness.

It was called the Great American Eclipse, as the shadow cast on the Earth by the Moon fell directly onto America - so this was the best place to watch the eclipse.

Well that's it for the evening! We will leave you with this incredible photo of the Moon moving across the Sun during this eclipse, as there's something rather special about it. 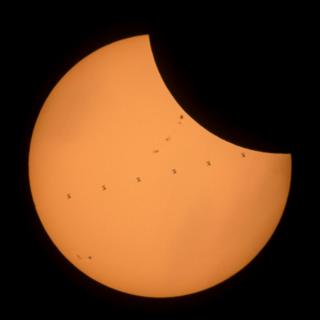 It might look like the Nasa photographer forgot to clean his camera, but actually those little dots on the pictures are in fact the space station moving across the Sun.

This picture is seven pictures stitched together, so you can see how the space station was moving. Pretty amazing, huh?!

Don't forget to tune into CBBC from 7:40am tomorrow for all the latest news from this evening's amazing space show - and more!

8:00pm - The solar eclipse in pictures

Take a look at some of the magical moments from this incredible event. 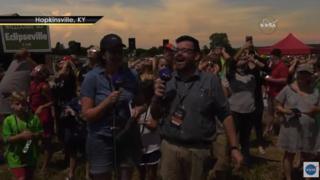 NASA
You can see just how excited people in 'Eclipesville' were to be watching such a stunning space show!
7:00pm - The moment the world first saw it

Monday's total solar eclipse is currently sweeping across the US, so people will see it at different times depending from where they are watching.

It arrived first on the west coast, so people watching from there were the first to see it.

This is the amazing moment the world first got a look!

The Great American Eclipse is now well and truly under way, with some amazing pictures coming from the US.

Pictures from Nasa show that once the Moon has completely covered the Sun and starts to move across it onto the other side, the light from the Sun starts to peek through again.

This creates a beautiful effect which is known as the diamond ring.

You can see from the pictures below why it is called that. 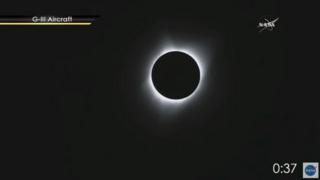 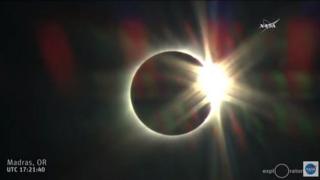 NASA
As the Moon moves across the Sun and the Sun's light is able to peak through, it creates this beautiful effect which is known as the diamond ring 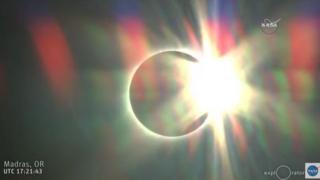 NASA
The diamond ring is extremely bright, which is why it is important that you never look at a total solar eclipse with just your eyes. You must always wear approved protective glasses, or use a special pinhole camera or projector
6:17pm - There it is!

Here is one of the very first images from one of Nasa's special aircrafts showing a breathtaking total solar eclipse.

Take a look at that!

NASA
This is what the total solar eclipse looked like on the west coast when the Sun was completely behind the Moon
5:45pm - It has begun!

Well, sort of. A partial eclipse is now visible right on the west coast of the US, which is the first place where people will get to see this incredible solar spectacle.

This means that the Moon has started to move in between the Earth and the Sun, and people watching from this area are now able to see the Sun slowly being covered up.

It is about half an hour before people in Oregon will get to see a total solar eclipse. Watch this space, Newsrounders! 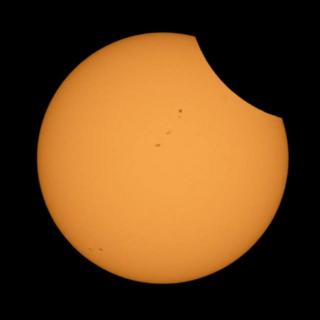 NASA
A partial solar eclipse is now visible from the west coast of the US
5:30pm - 'Once-in-a-lifetime event'
5:00pm - Make a pinhole camera

Space watchers in the UK will be hoping to see a partial solar eclipse soon, if the weather is clear!

If you want to try to spot it, you must make sure that you do so safely.

If you don't have special glasses, one way you can try to view the solar eclipse is using a special pinhole camera, which you can easily make at home.

If you haven't made one yet, there is just about enough time left to make one! Watch the video below to see how to make one.

It's not long to go now before the solar eclipse will be enjoyed by millions of people.

But how much do you know about this amazing space spectacle?

Test your knowledge with our quiz! 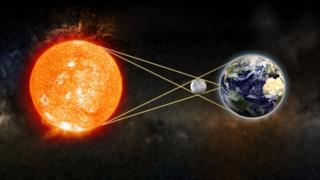 Millions of people across the US will be treated to an amazing total solar eclipse.

But - as long as the clouds move out of the way - we will only be able to see a partial solar eclipse here. But why is that?! 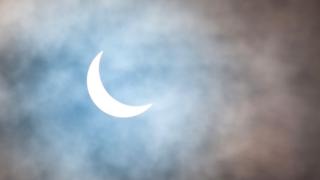 Getty Images
During a partial solar eclipse, the Moon only covers part of the Sun, so it looks a bit like it is 'taking a bite' out of it

Watch the video below to find out why the eclipse looks different depending where in the world you are.

And don't forget to tune into CBBC at 4:20pm, when Martin will be speaking to our reporter Nada who is over in the US getting ready for the big moment.

We will also be speaking to children too to see how they're feeling about it.

Newsround is following a scouting group from the UK who have travelled over to the US to watch this amazing spectacle.

The Salisbury Scouts have gone to Yellowstone National Park in Wyoming.

You can also see pictures here of people getting their special glasses and telescopes ready.

Today is the day that an amazing total solar eclipse is happening.

More than seven million people across the US are expected to witness the first total solar eclipse to sweep across the States from west to east since 1918 - so it's pretty exciting!

In the UK, we will be able to see a partial solar eclipse, if the weather is good.

That is because the shadow that the Moon will cast on the Earth is not going to fall directly on the UK. 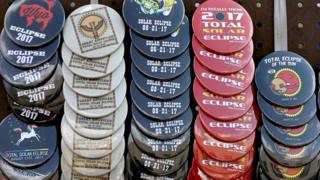 And come back to this page for all the latest news!

South American solar eclipse: Everything you need to know

US gets set for solar eclipse