Barcelona: What has happened in Spain? 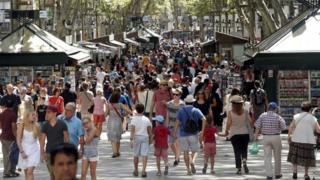 An attack took place in the Spanish city of Barcelona on Thursday 17 August.

A van drove into crowds of people in the centre of the city, in a tourist area called Las Ramblas.

Thirteen people have died and dozens were injured.

What happened in Barcelona? 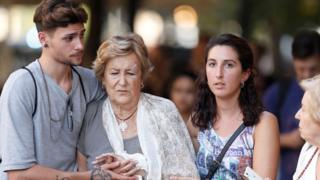 AFP
People who were in the area comforted each other when they reached safety.

The emergency services got to the location very quickly and tried to help as many people as they could.

They are now looking for the missing driver.

What happened in Cambrils? 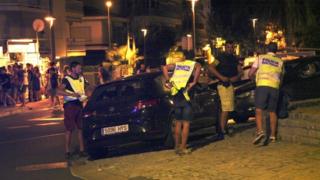 Spanish police said they have stopped another van attack in a small town called Cambrils near Barcelona.

The police managed to stop the attackers before they reached a crowded area.

One woman died and the five suspected attackers were killed by police.

Police think this attack was linked to the one that happened earlier in Barcelona.

Who carried out the attack? 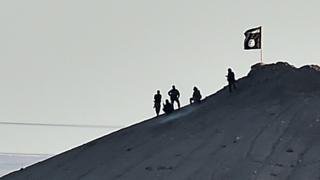 Four people have been arrested.

The police are still looking for the missing driver who ran away from the van.

Spain's Prime Minister Mariano Rajoy has described it as a terrorist attack.

The extremist group that calls itself Islamic State says it is responsible.

What has the world said? 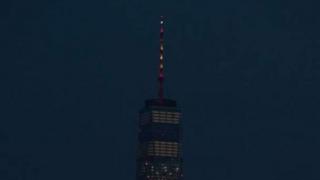 AFP
New York city's One World Trade centre was lit up in the Spanish colours, red and yellow in support of the people of Spain

The city's famous football club, FC Barcelona, has said it was "deeply saddened" by the attack.

Lionel Messi added: "There are many more of us who want to live in a world in peace, without hate."

Several famous building all over the world have lit up to show their support for the people of Spain.

New York City's One World Trade centre was lit up in the colours of Spain's flag, red and yellow.

The Eiffel Tower turned off its lights in support of Barcelona.

Guide: What is radicalisation and why do people join IS?