Why are flamingos pink? 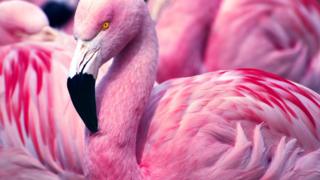 Have you ever heard the expression "you are what you eat"? Well, flamingos are just that. They get their reddish-pink colour from special colouring chemicals called pigments found in the algae and invertebrates that they eat. The same effect is seen when shrimps change their colour during cooking.

But flamingos aren't actually born pink. They are grey or white, and turn pink over the first couple of years of their lives. The word 'flamingo' comes from the Latin word 'flamenco' which means fire, and refers to the bright colour of the birds' feathers.

However, there was an amazing black flamingo spotted in Cyprus. It is thought it had a condition which affected the colour of its plumage. 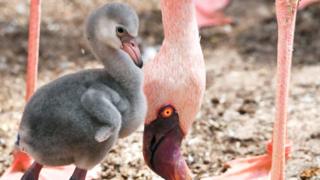 Getty Images
How sweet is this lesser flamingo chick?!

Did you know that flamingos live for quite a long time - about 20 to 30 years in the wild, or up to 50 years if they are in a zoo. One greater flamingo at a zoo in Australia lived to be 83!

They are also filter feeders. This means that they take up water in their beaks and sieve out tiny brine shrimps from the water with their special beaks and tongue. 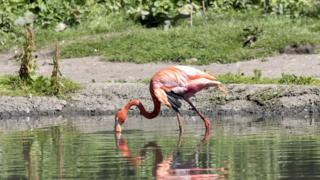 Even though it looks like they can, flamingos cannot bend their knee backwards! What you're actually looking at is their ankles. They're just a lot higher up their leg than you might expect. It uses less energy for a flamingo to stand on one leg than on two legs, which is why they can perform such an amazing balancing act when having a snooze! 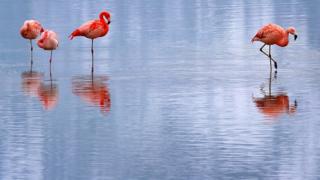 These flamingo boots were made for walkin'!