Violent clashes have taken place between two groups of protestors in the American city of Charlottesville.

The trouble started early on Saturday when hundreds of people who belong to white supremacy groups came to the city to protest against the plans to remove a statue.

White supremacists believe that white people are better than other races.

Why has the statue been an issue?

The statue was of Robert E. Lee, a general who fought in the American Civil War over 150 years ago.

General Lee fought for the side that supported slavery, and owned slaves himself. 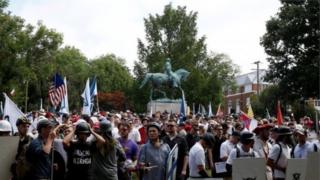 This year, the city council of Charlottesville voted to remove the statue because they didn't think they should celebrate General Lee anymore.

But white supremacist and Nazi groups, who think that removing General Lee's statue is an attack on the white race, began a protest against that decision.

Anti-racism groups arrived in Charlottesville to protest against the white supremacists, and violence broke out between the two groups.

A man drove a car into the anti-racism protesters - one woman was killed and 19 people were injured.

Emergency services arrived quickly to help, and a man has now been arrested.

Why is President Trump under attack? 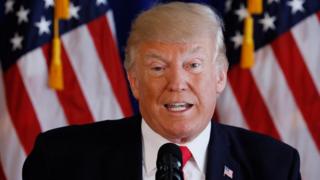 US President Donald Trump has spoken out about the violence several times.

In his first comments, he condemned the violence by "many sides". He was criticised by many people - including some politicians from his own party, for not being firmer on the violence.

They said President Trump should have been clear straightaway that it was white supremacists who were in the wrong, and that the car being driven into the crowd was an act of terrorism.

He then spoke for a second time, saying "Racism is evil and those who cause violence in its name are criminals and thugs." He also said the group's behaviour was going against everything Americans valued.

But in his latest comments, President Trump again, blamed both sides for what happened. Many politicians in his own Republican party disagree with him and lots of people say they are strongly against what Donald Trump is saying.

Why is this such a big issue in the US now? 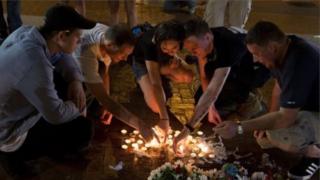 EPA
Vigils were held for the people affected by the violence

This was the biggest gathering of white supremacist groups in many years in the USA.

Donald Trump was criticised during last year's election for not being stronger in criticising racist groups which supported his campaign to be President.

He said he "disavowed" groups like these, which meant he didn't agree or want to be linked with them.

But the events in Charlottesville show once again how the US is deeply divided when it comes to race.

For more on how race affects America, watch this Newsround Special from 2015.

Why some Americans want the Confederate battle flag taken down