Football: What is everyone talking about? 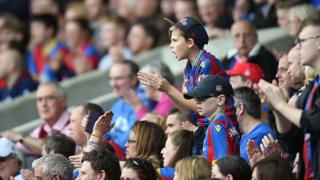 Footie fans all over the country will be looking forward to the start of the Premier League on Friday.

But if you're not a traditional football fan, there are lots of words to wrap your head around if you want to understand what everybody is talking about.

Don't worry - Newsround has got you covered!

Added time - This is not to be confused with extra time, which is something different. Added time is time added on to the end of a match after 90 minutes to make up for periods when the match might have had to be stopped earlier on in the game for injury or substitutions. It is usually around three or four minutes.

Away - If a team is playing away, they are not playing at their own ground.

Box - The box is the big rectangular area in front of the goal. If a defender commits a foul in the box, he may give away a penalty. It is also referred to as the penalty area or the 18-yard box. The goalkeeper is not allowed to touch the ball with his hands outside of this area. The D shape on the edge is called the Penalty Arc. It is an extra space for penalty kicks, only the attacking kicker and defending goalkeeper can be in it.

Champions League - This is the most important European football competition. The teams who finish in the top four in the Premier League will go on to compete in this famous competition.

Championship - This is the competition beneath the Premier League.

Corner - If a team sends the ball over its own back line (the line that the goal sits on), the opposition will win a corner. It is a good opportunity for them to score a goal, so teams don't want to give these away if they can help it. 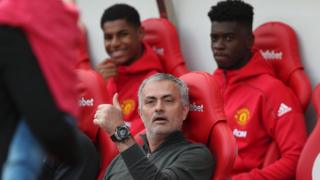 Dugout - This is where managers, coaches and players who aren't on the pitch at the time, like substitutes, will sit to watch the match.

Extra time - For many matches, it's not a problem if it ends in a draw after 90 minutes is up. But in some matches, a winner will need to be decided - for example, in finals. When this happens, there will be extra time after 90 minutes. This usually takes the form of an extra mini-match, with two halves of 15 minutes each. If nobody wins during this time, it will go to a penalty shoot-out. You don't have extra time in Premier League matches.

Foul - If a player commits a foul, he does something that is against the rules of the game. For example, it might be a dangerous tackle. If the foul is bad enough, the player might find themselves getting a yellow or even a red card (don't worry, we'll come on to those later).

Free kick - A free kick may be awarded to a player if they have had a foul committed against them, especially if it has caused them to lose possession of the ball.

Goal area - This is the smaller box immediately in front of the goal, which is inside the 18-yard box. Goal kicks are taken from inside this area, which is also called the six-yard box.

Home - If a team is playing at home, they are playing at their own ground. This normally means that most of the people in the crowd will be supporting them.

Manager - The manager is the main person in charge of the football team. During matches, you will often see them shouting from the sidelines. Sometimes the person in charge is called the Head Coach.

Offside - The offside rule says that if a player kicks the ball up the pitch to his or her teammate, the teammate must have at least two people between them and the goal they are trying to score into - usually the goalkeeper and one defender. They can be level with the defender though. This stops strikers from goal-hanging. A player can only be offside if they interfere at all with what happens in the match. It's not against the rules just to stand in an offside position if you're not actually affecting anything. You also cannot be offside if you receive the ball directly from a goal kick, throw-in or corner. You also can't be offside if you're in your own half. 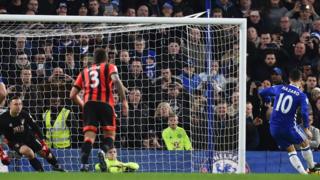 Penalty - A penalty is when a team get the chance to shoot at goal from the penalty spot, with nothing in between them and the goalkeeper (so no defenders). It is very likely that the player will score. A penalty will be awarded to a team if there is a foul made against them in the box.

Penalty shoot-out - A series of penalties are used to decide the winner of a match if there are no winners after extra time. Each team takes five penalties, in turn, to see who gets the highest score. If they still can't decide, then it goes to 'sudden death' and the first team to miss loses if the opposition score. They don't have them in the Premier League, but they do in some Champions League matches.

Possession - If a player is in possession¸ it means they have the ball. If a team is playing possession football, it means they are just keeping the ball and kicking it around between them, to stop the other team from getting it. Teams usually do this towards the end of a match if they are winning and want to waste time until the match finishes.

Promotion - The ultimate goal of any football team is to do well enough during a season that they get to move up into the competition above. This is getting promoted. If teams are in the Premier League, they cannot be promoted as the Premier League is the highest group you can be in. Towards the end of the season, all the fans will be talking about which teams are going to get promoted.

Red card - If a player receives a red card, they will be sent off the field. It may also stop them from playing in future matches. A player would receive a red card for seriously breaking the rules.

Referee - This is the person on the pitch who is in charge of overseeing the game. He or she will have a whistle and will be in charge of making decisions on the pitch about things like fouls. The referee has the final say on anything that goes on during the match. Clubs can ask for someone else to check red and yellow cards after the game, and sometimes if the referee doesn't see something during a game, a player can be punished later on.

Relegation - This is the opposite of promotion. Relegation is when a team does not do well enough during a season, so they are moved down to the competition below. They will have to spend the following season fighting to do well enough to be promoted back up again at the end of it.

Season - The season is the period during which the football league takes place. The season lasts from August until May.

Substitute - Substitutes are reserve players who do not start the match, but can be swapped on to the pitch for another player once play has started. Substitutes are used if a player on the pitch gets injured or perhaps the manager wants to bring someone off to rest. In the Premier League, teams can name seven people as substitutes for each game, but can only bring three of them on. 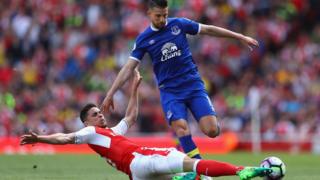 Tackle - A tackle is a move used by a player to try to win the ball off their opponent. There are rules about how players can tackle each other. If they do it in a dangerous way, they may find themselves being given a yellow or red card.

Throw-in - When the ball goes off the side of the pitch, the team who were the last to touch it concede a throw in. This means the other team get to throw the ball back into play. There are rules about the way the ball has to be thrown.

Transfer - A transfer is when a player moves to another team. During the year, there are two transfer windows - that means two periods during which players are allowed to register with new clubs. Transfer deadline day is the last day of a transfer window, and is always an exciting time as fans eagerly wait to see what deals will be done in time.

Yellow card - A player is given a yellow card if they are being warned following something that is against the rules. A yellow card isn't as bad as a red card, but if they receive multiple yellow cards, these can be turned into a red one, so any player who has been warned with a yellow card will want to be on their best behaviour.

The footie season in figures