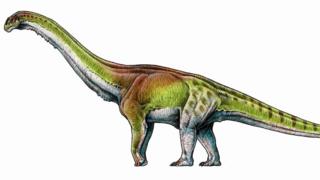 G. Lio/PA Wire
An artist's impression of the Patagotitan mayorum

A study of dinosaur bones suggests that the Patagotitan mayorum was the largest creature to ever live on Earth.

It's thought to have been the length of three London buses, half the width of a football pitch and as heavy as a space shuttle!

Fossilised bones of six of the young adult dinosaurs were found in a Patagonian quarry, in Argentina, in 2013.

Could there be even bigger, adult bones left to discover? 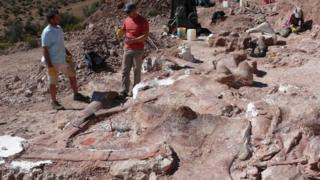 A.Garrido/PA Wire
The dinosaur weighed around 62 tonnes and measured more than 35 metres from nose to tail

Scientists think that after the young adult dinosaurs died, their bones were preserved in mud.

Known as the Patagotitan mayorum, they're part of the Titanosaur species of dinosaur that lived 100 million years ago. 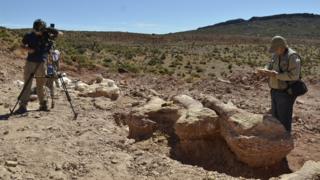 A.Otero/PA Wire
Research shows that the Patagotitan mayorum were much bigger than dinosaurs like the Tyrannosaurus rex

They were huge plant-eaters that stood on four legs.

One of the authors of the study, Diego Pol, said: "I don't think they were scary at all. They were probably massive slow-moving animals."