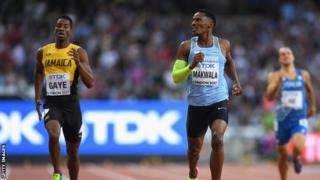 Several athletes at the World Athletics Championships in London have come down with a tummy bug.

There has been an outbreak of a virus at one of the official team hotels where they are staying.

Botswana's Isaac Makwala withdrew from Monday's 200m heats after he was unwell and he was stopped from competing in the 400m final by event organisers.

Tummy bugs are common and can cause diarrhoea and sickness.

You can catch them from eating contaminated food or through contact with people who have already got one.

If that infected person doesn't wash their hands before handling food or touching objects and surfaces that other people then touch, there's a good chance they could get sick too.

The illness is not generally dangerous and most people make a full recovery within one to two days.