The smallest and biggest things to go to space 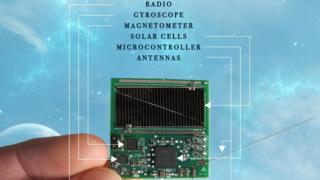 Breakthrough starshot
This is the breakthrough Starshot, the worlds smallest space craft and it has just been blasted into space for testing!

The smallest spacecraft to ever be sent to the stars has completed its journey out of Earth's orbit.

The tiny bit of kit is about the size of a train ticket but is packed with technology such as solar panels and different sensors.

A bundle of the super small spacecrafts were sent up as a test and if they work, more will certainly follow.

As they are super small, they are cheap and easy to send to space.

When they get there, lasers on earth will be fired at the chips, making them to go to super high speeds to travel to distant stars.

The $25 (£19) spacecraft - by the way it's the cheapest spacecraft ever - work as a swarm and the idea is that the more that go up together, the better the results!

But if that's the smallest thing, what are the biggest things ever sent to space? 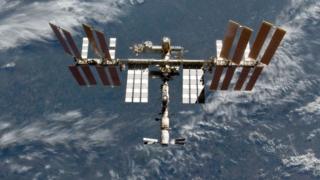 NASA
The ISS is huge but is actually quite light compared to its size, but weight doesn't really matter much in space where there isn't the same gravity as here on Earth!

The International Space Station is the biggest object in orbit over our Blue Planet. It weighs about 450 tonnes which is about the same as a fully loaded 747 airplane you would go on holiday on.

It wasn't sent up in one piece obviously but in several sections which were then connected in orbit, like a massive model kit! 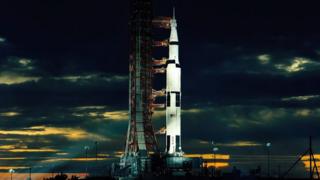 NASA
No rocket used today come close to the sheer size and power the Saturn V rocket had.

The Saturn V rocket is truly massive, in both size and weight!

This monster weighs about 2,722 tonnes fully loaded and has helped NASA launch lots of people and equipment into the great void of space.

Last used in 1973, the Saturn V is still the tallest, heaviest and most powerful rocket to ever blast off into orbit and even further when it was used to help send NASA astronauts to the moon. 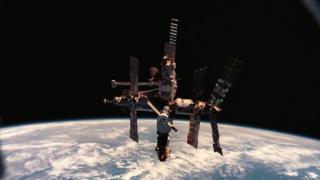 NASA
The Mir station ended its life like many orbital spacecraft, by burning up as it re-entered earths atmosphere.

This is the Russian space station, Mir and it's the lightest on our list, weighing in at around 140 tonnes, which is about the same as 11 double decker buses.

It was built by the former Soviet Union which is a group of countries that were all governed by the Russian communist government.

It was the first space station to use a modular system, with different modules connecting together in space to form a structure, just like the ISS.

Mir was smaller than the ISS but at the time it was the biggest thing orbiting our earth, beating the American Skylab in size and weight.