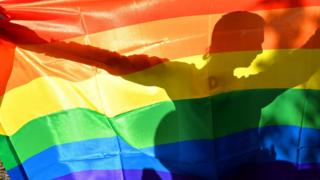 The Pride parade in London is taking place on Saturday 6 July.

Pride is a global movement fighting for equal rights for LGBTQ+ people all over the world.

LGBTQ+ stands for lesbian, gay, bi, trans and queer. The + is an inclusive symbol to mean 'and others' to include people of all identities.

As well as an opportunity to raise awareness of the fight for equal rights for the LGBTQ+ community, Pride is also a celebration of diversity.

Pride in the US

June is particularly significant as this is Pride Month in the US, which is where the movement fighting for gay rights began with the Stonewall riots in June 1969.

Find out more about the riots that started the Pride movement

Pride has been celebrated all over the world over the last few weeks.

Two years ago in the UK, the Pride celebrations were particularly significant as 2017 marked the 50-year anniversary since it stopped being illegal for two men to be in a relationship in England and Wales.

This is called the decriminalisation of homosexuality, and meant that this wasn't going to be a crime anymore. The law changed in Northern Ireland and Scotland later, but it was never illegal for two women.

Even though the law changed in the UK, it is still illegal to be gay in some parts of the world. Campaigners continue to work hard to get equal rights for gay people all over the world.

So what's happened in the UK and how have things changed? 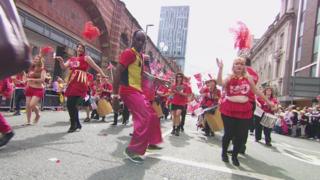 For hundreds of years, gay people have struggled to be accepted and treated the same as people who are not gay.

They have been oppressed and even killed because of who they have feelings for.

Professor Brian Heaphy, an expert from the University of Manchester, explains: "Homosexuality was often treated as an illness by doctors and psychiatrists, who thought they could 'heal' people by treating them.

"Lesbian, gay, bisexual and transgender people were often forced to hide their identities from their families, friends, colleagues and in public to avoid the risk of being singled out, harassed or becoming a victim of violence." 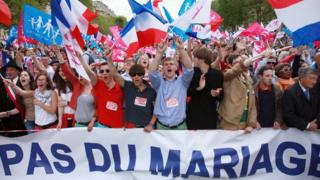 There were laws that stopped gay people from having the same rights as people who were not gay. For example, gay people couldn't get married or adopt children.

Up until 1967, gay and bisexual men could face a maximum sentence of life in prison if they broke the law around homosexuality.

In the 1950s, a group was set up to look at the way gay men were treated by the law. It put together a report for the government that recommended that the law should be changed.

The government did not make the changes at first and more people started to campaign for the rights of gay people. 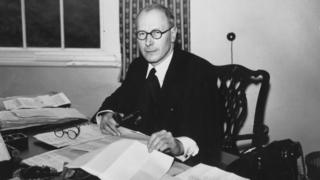 Getty Images
This man, John Wolfenden, led the group which made recommendations to the government about how the law should be changed

Eventually, the law was changed in 1967, which allowed two men to be in a relationship together without the fear of being arrested.

Even though this happened, there were still many laws in place at the time which meant that gay people did not have the same rights as people who were not gay.

More gay men were arrested after 1967 for things which they would not have been arrested for if their partner had been a woman.

The change in the law in 1967 was just the beginning of many changes to improve gay people's rights.

1969 - A series of demonstrations in New York called the Stonewall riots started after the police raided a bar called the Stonewall Inn, which was a popular place for gay people to hang out. It is said to be the start of the movement of people fighting for gay rights in the US.

"At Pride, gay people felt they could be seen in public and show their faces. It was about being seen as gay, being proud and not needing to hide.

1972 - The first Pride festival, which celebrates the gay community and supports equal rights, took place in London on 1 July. 2,000 people took part. Now, more than one million people celebrate it in the UK's capital, and Pride events take place all over the world.

1988 - A law called Section 28 was introduced which meant that teachers were not allowed to 'promote' gay relationships in schools. Many people argued that this prevented teachers from talking about gay relationships. It wasn't until 2003 that this was overturned. 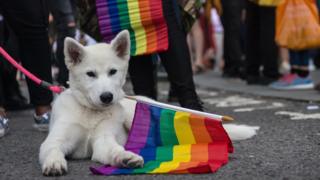 Getty Images
The rainbow flag is a symbol of gay pride

2000 - A law was changed which allowed gay and bisexual people to be in the armed forces.

2002 - A law was changed to allow gay people (and also unmarried couples) to adopt children.

2003 - The ban on 'promoting' homosexuality in schools (Section 28) was overturned.

2004 - This year marked the start of civil partnerships for gay people. This meant that they had similar rights to people who were married, but civil partnerships are not exactly the same as marriage. Some people did not think it was good enough and that gay people should be allowed to get married.

2008 - It became illegal to encourage homophobic hatred. Last year, more than 7,000 hate crimes were reported against gay men and women in the UK.

2013 - Gay marriage was made legal in England and Wales, and later in Scotland. In Northern Ireland, gay marriage is not legal.

What is the situation now?

A lot has changed in the UK. 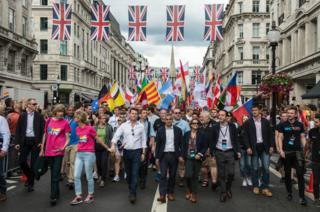 Men who were convicted under the old laws that made being gay illegal can apply to have these taken off their record.

Peter says that attitudes towards gay people have changed too.

Treating somebody differently because of their race, religion, gender or sexuality (for example, for being gay) is called discrimination

Today it is illegal to discriminate against somebody because they are gay, although many gay people face discrimination in their daily lives.

Peter says: "We want to get to a situation where no one cares what sexuality you are; where we accept the person and their right to love whoever they wish - male, female, both or neither."

Thousands of gay and bisexual men pardoned for 'crimes'