While summer in the UK can mean lots of warm and sunny weather, it can also mean that people with hay fever might have a hard time.

From runny noses and eyes, to a sore throat, people who suffer from hay fever have started to notice their symptoms re-appearing again recently.

But what is hay fever, and what causes it?

How to be a good friend to someone with an allergy

World Asthma Day: Find out more about the condition

What is hay fever? 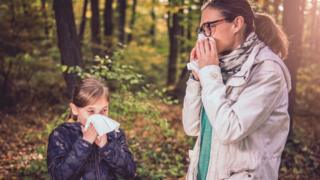 Hay fever is an allergy - people who have it are allergic to pollen.

It has proteins in it which can cause your nose, eyes and throat to become swollen or irritated.

This means people might suffer from symptoms like itchy eyes or runny noses. This is because your body tries to protect itself by getting rid of the pollen.

Hay fever is one of the most common allergies in the UK, affecting around 13 million people.

You can get it at any age, although it usually starts when you are young.

Not everyone has hay fever, but is it more common in people whose family members already have it, or other allergies, especially asthma. 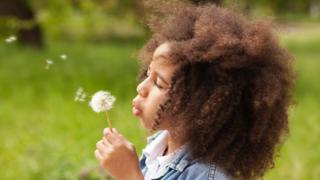 Getty Images
Different types of plants give out pollen at different times of year.

People can be affected by different types of pollen as well.

For example there is lots of tree pollen in spring, grass pollen in summer and weed pollen in the autumn.

What can help people with hay fever? 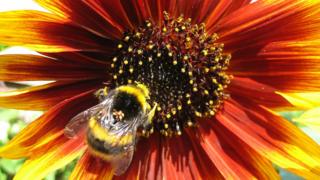 A bee covered in pollen on a flower

Although there is no cure for hay fever, people who have it can manage the symptoms in lots of different ways.

Sometimes special medicine called antihistamines or steroids are used to help prevent a reaction and reduce the swelling.

Always talk to your doctor for advice and to discuss ways of treating hay fever symptoms. 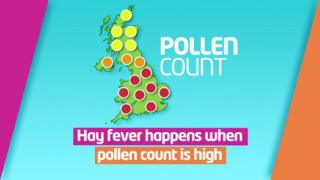 People with hay fever can also keep an eye on how high the levels of pollen in the air are, by watching special weather reports.

As well as telling the weather, presenters can also give a pollen count, to warn people when the levels are high.