There was an attack at an Ariana Grande concert in Manchester.

An explosion went off just after 10:30pm on Monday 22 May as people were leaving the Manchester Arena.

Twenty-two people died and more than 50 people were injured. Some of those involved were children.

Those who were hurt were looked after at local hospitals.

The Queen visited one of the hospitals, and told one girl: "I hope it doesn't take too long for you to mend."

The UK Prime Minister Theresa May thanked the emergency services for working "tirelessly" to help people after the attack.

She said "every single one of us stands with the people of Manchester" after what happened, and that the spirit of the city "will never be broken".

The police have said the man responsible died in the attack.

A group called Islamic State have said they organised the attack, but police haven't said if that is true.

Guide: What Is Islamic State

What help has been given to the people who were attacked?

Lots of people were given help very quickly by emergency services rushing to the area.

Around 400 police officers worked through the night.

Kal was at the Ariana Grande concert and told Jenny how the emergency services, and ordinary people, were helping.

Nearby hotels opened their doors to help people and a help centre has been set up by the police for anyone who was lost or injured.

Taxi drivers came out to work for free, to give people a lift home.

Greater Manchester Police thanked the emergency services and all the people who helped others. 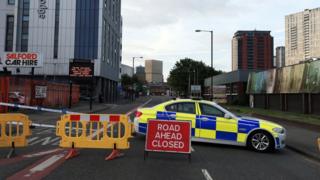 PA
Scene at the Manchester Arena

Nearby hotels opened their doors to help people and a help centre has been set up by the police for anyone who was lost or injured.

Taxi drivers came out to work for free, to give people a lift home.

Greater Manchester Police thanked the emergency services and all the people who helped others.

Newsround spoke to children who go to school in Manchester about how they feel after the attack.

Prime Minister Theresa May says her thoughts are with the victims and their families.

World leaders have condemned the attack and offered their support to the people of Manchester, including US President Donald Trump, who called those responsible "evil losers".

Ariana Grande tweeted afterwards: "Broken. From the bottom of my heart, I am so so sorry. I don't have words."

Other music stars have been reacting too, Taylor Swift wrote: "My thoughts, prayers and tears for all those affected by the Manchester tragedy tonight. I'm sending my love."

And Harry Styles said: "I'm heartbroken over what happened in Manchester. Sending love to everyone involved. "

A vigil is planned at Manchester Town Hall this evening for people to come together to remember those who have died during the attack.

Schools that were due to have exams today have been told they can re-arrange them.

What should you do if you're upset?

The most important thing to remember is that it's perfectly normal to feel upset when something like this happens. Talk to someone you trust like a parent or a teacher. 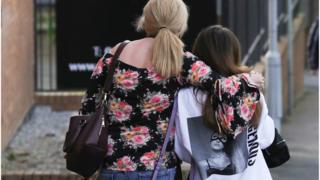 Getty Images
Discuss the stories with your parents, or another adult you can trust

For more help if you are upset by the news, please follow the advice on this page.

We will be updating this page with the latest information throughout the day.