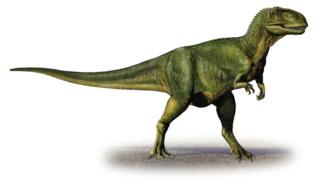 Sergey Krasovskiy/Stocktrek Images
The scientist who discovered the Abelisaurus fossil said it was like winning the lottery because the fossil is so rare.

A fossil of one of the last dinosaurs living in Africa has been discovered, and it's over 66 million years old!

The dinosaur is commonly known as the Abelisaurus but its full name is Chenanisaurus barbaricus - what a mouthful!

Abelisaurus was the top predator in Africa, South America, India and Europe all the way up to its extinction.

The amazing fossil was found in a mine in northern Morocco.

It was then sent to Dr Nick Longrich who teaches at Bath University.

With the help of his colleagues based across the world, Dr Longrich identified it as an Abelisaur. 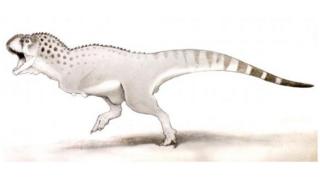 university of bath / pa
Abelisaurus looks a little bit like a Tyrannosaurus Rex, which dominated North America but it is smaller and has much shorter arms.

Dr Longrich said: "This find was unusual because it's a dinosaur from marine rocks - it's a bit like hunting for fossil whales and finding a fossil lion."

It's safe to say the dig was a ROAR-ing success!

The first dinosaurs could have come from the UK