The Tour de Yorkshire took its name from the world famous Tour de France and 2017 will be the second year it has taken place.

Covering a total of over 300 miles, split into three separate stages, the Tour de Yorkshire is one of the UK's longest and toughest bicycle races.

In 2016, the tour was watched on TV in over 150 countries around the world and attracted one and a half million people who lined the route to cheer on the riders. 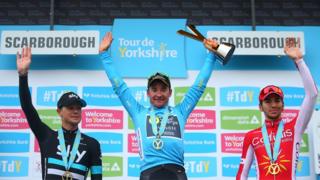 Getty Images
Here is overall winner, Frenchman Thomas Voeckler in the middle with runners up Nicolas Roche on the left and Anthony Turgis on the right after the end of the 2016 Tour de Yorkshire.

Each stage takes a different route and presents the riders with different climbs, not quite as steep as some of the climbs in the Tour de France but still very challenging.

The Grand Départ is the name given to the start of the Tour de France. Since the 1970s it has been common for the Grand Depart to take place outside of France and competition for a city to win the chance to host it is strong.

After the success of the Tour's visit to the UK, the idea came about for Yorkshire to host its own stage based cycle race.

Now in its second year, the Tour de Yorkshire brings some of the world's biggest cycling teams and riders to the rolling hills of the North West of England.