Galatasaray youth player and other top moments of incredible sportsmanship

A Galatasaray player showed great sportsmanship by deliberately missing a penalty during a youth team game in Turkey.

Thirteen-year-old Beknaz Almazbekov captains Galatasaray's Under-14 side. He was awarded a penalty against Istanbulspor after tripping up and falling over inside the area.

The referee awarded a penalty but replays showed the forward lost his balance rather than any contact being made with the defender.

Knowing that the ref had made a mistake, and with his team already winning the game 1-0, Beknaz kicked the ball wide of the goal and out of play.

This coin toss boy stole the show at the Australian Open

Quiz: Can you name these football players?

Despite the missed penalty, Galatasaray managed to beat Istanbulspor 3-0 showing that doing the right thing can pay off.

But this isn't the first time that sports players have showed honourable behaviour on the field. 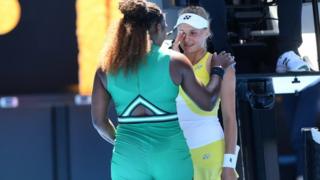 European Photopress Agency
Dayana Yastremska was visibly upset after losing to Serena Williams, but the 23-time Grand Slam star comforted her and told her how amazingly she'd played

Serena Williams was praised for the way she has treated Dayana Yastremska after beating her in the Australian Open in January.

After losing the match and missing out on her spot in the Round of 16, Dayana broke down in tears.

But the 23-time Grand Slam winner Serena went over to her to comfort her.

Social media users praised her actions, with one saying "Isn't she lovely? 😍" and another saying "Just when you think you can't love her anymore..." 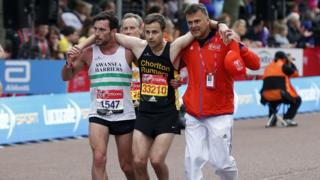 In April 2017, there were amazing scenes at the London Marathon, when runner Matthew Rees helped a competitor in need to cross the finish line.

Matthew saw that David Wyeth was struggling near the end of the course, but rather than run past and finish his own race, Matthew put his arm around the complete stranger and helped him to complete it too.

Matthew was praised by many for his display of amazing sportsmanship.

Sportsmanship is nothing new, as this example shows. Back in 1936 at the Olympics in Berlin, Jesse Owens was competing against Luz Long in the long jump to qualify for the final.

Owens was the world record holder but wasn't having a good day, and had foot-faulted twice. 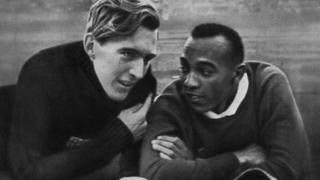 Long had a chat with Owens about how to change his run-up, so he didn't make another mistake.

His next jump worked and he went on to the final - and then to win the gold medal.

Many of us can find our brothers and sisters irritating from time to time! But this story shows just how important our siblings can be.

In September 2016, Jonny Brownlee was up front in the final 700m of the Triathlon World Series in Mexico, when heat and exhaustion took over him. 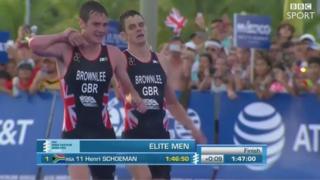 Alistair held on to Jonny as they prepared to cross the line.

He began to struggle and his brother Alistair caught up. But rather than leaving him, Alistair gave up the chance to take silver or gold to help his brother over the finish line. He even pushed him over it to finish ahead of him.

When asked about what happened, Alistair said it was "a natural human reaction" to help his brother like that. "I'd have done the same thing for anyone in that position."

When he was playing for West Ham in 2001, striker Paolo di Canio got himself a Fifa Fair Play Award for a gesture made during a Premier League game against Everton.

Their keeper had left an open goal after running out of his area, but he fell to the ground with an injury. 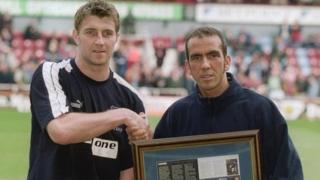 Di Canio's teammate crossed the ball to him - and he had an open goal to shoot! But seeing the injured keeper, he decided to catch the ball instead and stop play.

He got a standing ovation from the crowd for his actions.

It doesn't take just one person to demonstrate sportsmanship, as these next two athletes showed.

In the qualifying heat for the 5,000 metres in the 2016 Rio Olympics, New Zealand's Hamblin tripped and fell over, taking down the US's D'Agostino with her. 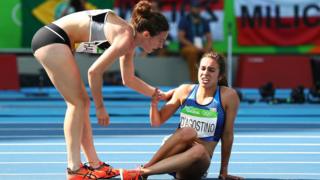 D'Agostino got up quickly, but instead of running on ahead, she helped Hamblin to get up. She then tripped herself later in the race, and Hamblin stopped to help her. 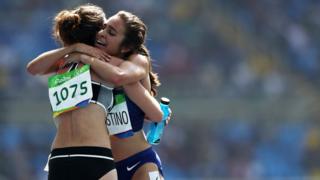 The athletes crossed the finish line together and were later awarded the Olympic Fair Play Award in recognition of what they had done.

They say honesty is the best policy - and we're sure that Jack Sock believes that, after what he did on the tennis court in the Hopman Cup at the start of 2016.

A line judge had said that his opponent Lleyton Hewitt's ball was out. But Jack Sock knew that wasn't true.

Even though it would have given Hewitt another chance to serve, Sock told Hewitt that he should challenge the call. 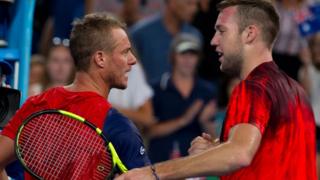 So he did. Hawk-eye revealed the ball to have been in and the point was replayed. Nice one, Jack!

In this example, it was a whole team that showed a sporting gesture.

During a European championship match against Germany in 2016, their opponents scored a goal right at the last minute.

However, it was found out after that when the goal was scored, an extra player had been on the field, which meant the Norwegian team had the right to challenge the goal - especially as the result saw them miss out on their Olympic dream. 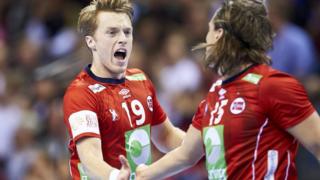 After much debate, they decided not to protest it, as they didn't feel the extra player had affected the goal - even though it was against the rules for the player to be there.

Germany went on to qualify for the Olympics and the Norwegian handball team also won an Olympic Fair Play Award for their behaviour.

Another example of someone wanting to let an opponent have the glory came when Shawn Crawford came 4th in the 200-metre sprint in the 2008 Beijing Olympics.

He would not have expected to be on the podium, but the runners in 2nd and 3rd were disqualified for stepping on the lines, so Crawford ended up winning the silver medal. 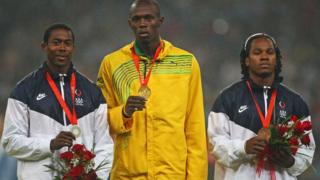 Getty Images
Shawn Crawford (on the left) gave his medal away

He didn't think it was fair though, so he posted it to one of the disqualified competitors, saying that they should have won it.

Playing sport often comes with a risk of getting injured, even if it's small. But for a contact sport like rugby, injuries are not uncommon.

In 2003, New Zealand and Wales were playing when Wales's Colin Charvis was knocked out. 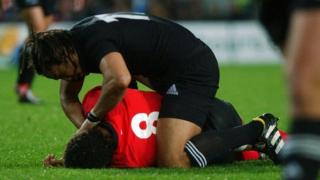 Getty Images
New Zealand's Tana Umaga is seen helping Colin Charvis, who had been knocked out

Rather than carrying on playing, New Zealand's Tana Umaga ran to Charvis, put him in the recovery position and took out his mouth guard, to make sure he was okay.

He became the first New Zealander to receive the Pierre de Coubertin medal for sportsmanship.

And finally, back to athletics. This time, it isn't quite a show of sportsmanship by an athlete, but we like this story!

Back in the 1992 Olympics, British runner Derek Redmond badly injured his hamstring in the 400m. He tried to hobble around the course, but was clearly in a bad way. 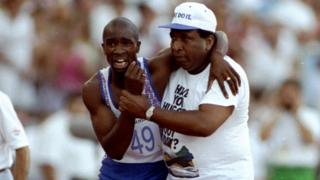 Getty Images
Derek Raymond's dad went to help his son out, when he suffered a bad injury during his race

His dad saw he was struggling and fought his way past security to get to the track and help his son across the finish line.

How Jonny and Alistair Brownlee helped each other growing up

Do you agree that this is the best team of players in the Premier League?