Comments: Who's your player of the year? 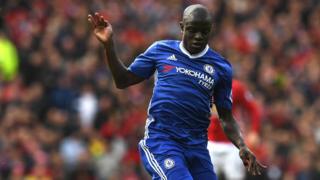 This is the man who players and coaches think is the best player in the Premier League.

It's one of the highest awards in English football and is voted for by players, former players and coaches.

He only joined Chelsea this season after starring for Leicester City last year.

But we want to know - who is the the best player YOU'VE seen this season, and why?

I think it should be Christian Eriksen from Tottenham Hotspur for his super assists! But I am an Arsenal fan!

The best premier league football player is Sanchez from Arsenal

We think that the best player in the Premiership this year is Eden Hazard from Chelsea.

Thank you for your comments this chat is now closed.

Five AMAZING football comebacks from over the years