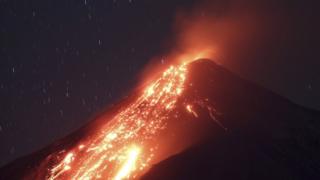 Land volcanoes better watch what they're up to, as scientists are going to be keeping a very close eye on them.

A new project is starting that will see scientists, led by UK experts, monitoring every land volcano on Earth from space.

They will do this by using two special satellites. The idea is that the satellites will help to look for signs on the Earth's surface of when an eruption might be coming.

What will the satellites see?

When magma rises up from inside the Earth, it causes the ground above it to swell.

While you might not be able to see this standing on the Earth, scientists say this can be spotted from space.

So the satellites will look out for things like changes in the shape of the ground near to volcanoes, which might suggest when magma is rising up.

They will send what they see back to Earth using a high-speed laser link. 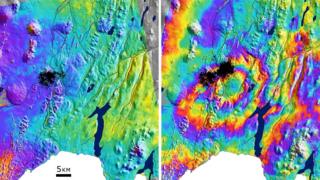 The picture above shows a volcanic area in the north of Iceland.

The picture on the left shows the volcano just before any volcanic activity starts. The one of the right shows the ground lifting and quakes - the little black dots - increasing. The coloured lines show how the ground has moved.

By comparing pictures at different times, scientists can see if there are any changes - and the computers used are actually able to automatically recognise when this is happening too.

What difference will this make?

If scientists spot changes in the shape of the ground near to a volcano, they can alert people living in those areas.

It won't mean that an eruption is definitely going to happen, but it means that people can be more prepared in case it does.

At the moment, there are about 1,500 active volcanoes in the world, but only a small number of those are heavily monitored. 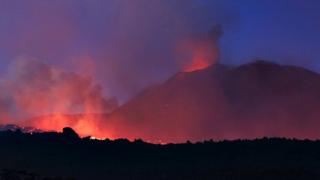 AFP/Getty Images
This picture shows Mount Etna, on the island of Sicily, erupting. It is Europe's biggest active volcano

As volcano expert Boris Behncke explains: "Instruments are expensive and it takes many scientists to keep track of all of the data that pours back."

The project will be particularly important for poorer countries that do not have the money or enough experts to monitor their volcanoes closely enough.

By building up pictures from all of the volcanoes, the satellites will help scientists to get a better idea of what different types of behaviour by the volcanoes mean.