Your quick guide to the French election 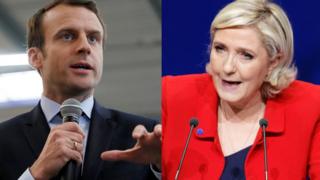 It's almost time for France to choose a new president.

It's a big decision for France to make at a time when there is a lot of change going on in the world of politics, with Donald Trump becoming the new president of the US not very long ago, the UK leaving the European Union (EU) and the UK holding its own general election on 8 June.

Find out more about the French election below.

How is France ruled?

There is a different system to choose a leader in France, as the country is ruled in a different way to the UK.

France has a president who is the head of state. 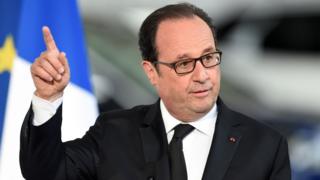 AFP/Getty Images
The current president of France, Francois Hollande, has been in the job for five years. He is not trying to be president for a second term

Once French voters have chosen their president, they later vote for members of parliament (MPs) - called députés- to represent them.

The president appoints a prime minister, who is head of the government, and the two work closely together with the government to run the country.

How will the next president be chosen?

To begin with, there were 11 people standing in the race to become the next president of France. Now, after a first round of voting, there are just two left for France to choose from - Emmanuel Macron and Marine Le Pen.

They both have different opinions about how the country should be run.

On 23 April, France chose between the original 11 candidates and the top two have now gone through to a second and final round of voting, which will take place on 7 May. 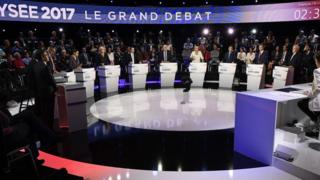 Reuters
The 11 candidates worked hard in the run-up to the election to convince people to vote for them, like in this debate that was shown on television

If one person had won more than half of the votes during the first round, they would have become the next president, but nobody won that many.

In fact, nobody has won more than half the votes to become president after the first round since the current voting system was introduced in the 1960s.

Why is this presidential election unusual?

This election is unusual because for the first time in modern history, the current president of France - Francois Hollande, who belongs to the Socialist party - is not putting himself forward for a second term in the job.

Benoit Hamon was his party's candidate, but he did not win enough votes in the first round of voting to go through. 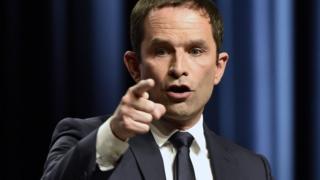 AFP/Getty Images
Benoit Hamon was the presidential candidate for the current president's political party, the Socialists

Francois Fillon was the candidate for the Socialist party's main rivals, the Republicans. But his popularity went down as he is being investigated about how some public money may have been spent, so he did not get through to the second round either.

Now, for the the first time in decades, France will choose a president who does not belong to one of the country's two main political parties.

We do not know exactly what will happen. We will have to wait to see who French voters choose on 7 May.

Once the presidential election is out of the way, voters in France will head to the polls again in June to choose the MPs they want to represent them in the National Assembly, which is part of parliament - a bit like the House of Commons in the UK.

The president will also appoint his or her prime minister and a government will be formed.