PM's call for general election for 8 June backed by MPs 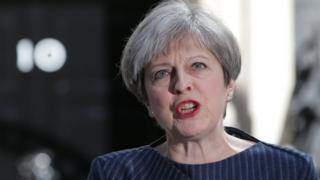 British Prime Minister Theresa May has called for a general election to take place on Thursday, 8 June.

In a general election, adults across the UK vote to choose the MPs (Members of Parliament) that represent their local areas, or constituencies.

The political party that wins the most MPs usually forms the government that runs the country.

Her decision had to be approved by MPs and in a vote on Wednesday 19 April the majority of MPs voted in support of a June election.

The announcement has come as a surprise because the next election wasn't due to happen until 2020.

Mrs May has previously said she wouldn't call an election earlier than then.

But she explained on Tuesday that having one now was in the national interest.

"I have only recently and reluctantly come to this conclusion," she said outside 10 Downing Street.

"Since I became prime minister I've said there should be no election until 2020, but now I have concluded that the only way to guarantee certainty and security for the years ahead is to hold this election and seek your support for the decisions we must take."

This comes after Mrs May officially kicked off the process of the UK leaving the European Union, the club of 28 countries around Europe.